I often see first-time owners fretting in forums about their dog’s first heat cycle.  There’s a lot of confusion surrounding heat cycles, especially regarding when they should happen. Some worry that it’s not happening soon enough. Others that it’s happening too early.

If you’re in the same boat, let me start by reassuring you that there’s generally nothing to worry about.  Let’s talk a bit about what you need to know before your dog’s first heat cycle. We’ll go over what to expect, when to expect it, and when (if ever) to be concerned.

What happens dogs go through their first heat?

I’m going to assume that you have a basic understanding of what it means for a female dog to be in heat. If not, the short version is that it’s basically the only time of the year when your pet can become pregnant.

Heat only occurs in intact females. Since you’re here searching for info on your dog’s first heat cycle, I’m also going to assume that she hasn’t had her spay surgery yet. Don’t worry, I’m not going to lecture you on the benefits of spaying your dog.  I don’t assume to know your reasons, and you’re not here for judgment.

Now that we have that out of the way, let’s go over what to expect when Fifi is “in season.”

Stages of Heat in Dogs

Although there are technically four stages in your dog’s reproductive cycle, the first two are what we think of when we imagine a dog in heat. 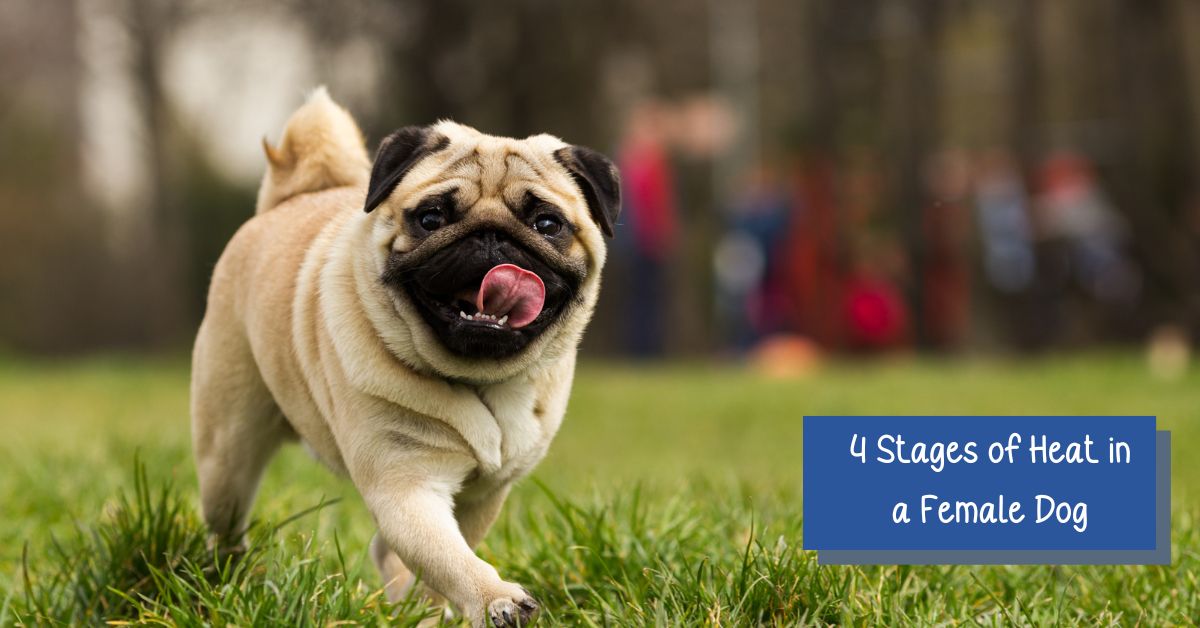 When people talk about a dog being in heat, they’re typically thinking about this first stage, since it’s by far the most obvious of all of the stages in terms of signs and symptoms.

The proestrus stage kicks off your dog’s heat cycle. Typically lasting about 10 days (but can last up to 20+ days), this is the stage where male dogs start “sniffing around” your sweet Fifi. However, while they may definitely be more interested in her, she’s not quite ready for them yet. In fact, she may be downright snappish towards them.

The most obvious signs of proestrus are swelling of the vulva and bloody vaginal discharge. If you have a short-haired breed, her swollen vulva will often be the first sign that she’s gone into heat. After that, you may notice some blood-tinged spotting.

The bleeding may get a bit heavier, but if you have a furry pooch, you may not even notice it. About 7-10 days into her heat cycle, the bleeding will ease up and turn into a pink watery discharge again.

During her heat cycle, your dog will need to go outside to pee more often. Keep in mind that she is marking her territory and sending out “hey, guys, here I am” signals.

It’s also not uncommon to notice her eating less. That said, if she loses ALL interest in eating, contact your veterinarian immediately.

If you don’t want to deal with the mess of bloody discharge (and really, who does?), I recommend stocking up on doggie diapers or pads.

Also, while she’s only technically fertile during the next watery discharge stage of her heat cycle, male dog sperm can live up to a week in her reproductive system. So if she does manage to mate near the end of this cycle, she could still become pregnant.

The estrus cycle is the true reproductive cycle of your dog’s heat. Aside from some pink discharge, she’ll stop bleeding for the most part. During this time, there’s really only one major sign: she becomes VERY interested in mating.

She’s not exactly choosy about which male dog she “does the deed” with, either. So if you want to avoid pregnancy, you’ll want to keep a very close eye on her, even if you have a fenced-in yard. Male dogs can smell her pheromones from great distances- much further than you might expect- and they’ll do just about anything to get to your girl.

A fun little side note: it’s rumored that Queen Elizabeth’s beloved Dorgis (dachshund/corgi mixes) sprung up after one of her corgis managed to sneak off for a rendevous with Princess Margaret’s dachshund Pipkin.

If even the Queen of England couldn’t prevent her pooch from having a one-night stand, what chance do we commoners have? The bottom line, if puppies aren’t part of your plan keep your female dog far, far away from any intact male dog during estrus!

I also can’t stress enough the importance of making sure your girl is wearing her id tags during this stage. Better yet, get her a microchip! Her main goal is to get out and find a mate. You would be surprised at the lengths she’ll go to reach that goal. 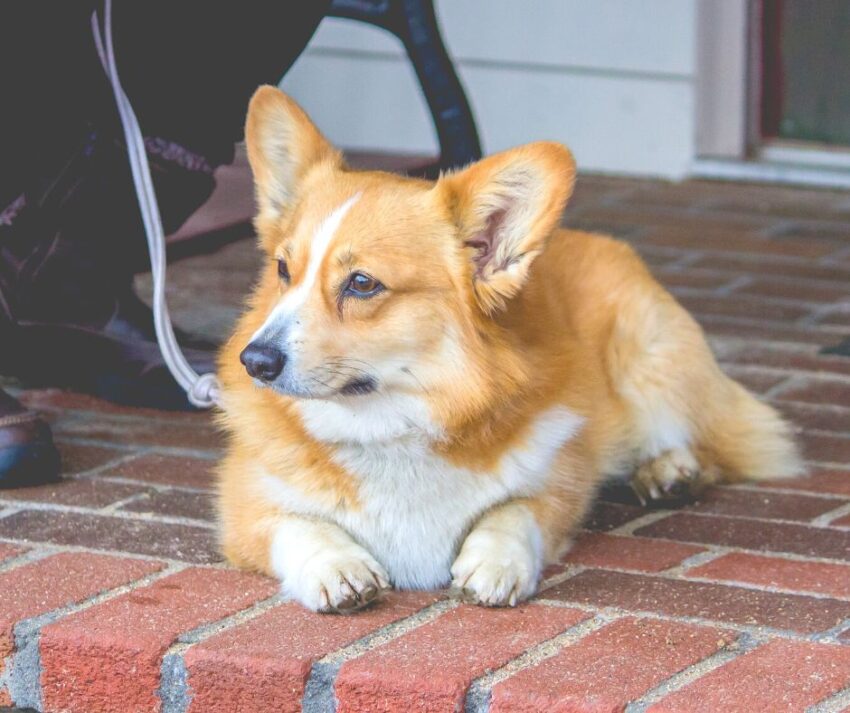 Although there’s one more stage (below), the diestrus stage is basically the end of your dog’s heat cycle. According to WebMD Pets, this “resting phase” can last anywhere from 10 to 140 days.

During this stage, she may still bleed a little, but at this point, it’s mostly a bit of watery discharge that’s barely even pink. Her vulva returns to normal, her hormones stabilize, and she gets back to her regular self.

Or, of course, if she managed to sneak off for a rendevous, she pops positive on a pregnancy test and you’re in for a whole new cycle!

The anestrus cycle is just the fancy word for the rest of the year, the time before her next heat cycle.

When Does a Dog’s First Heat Cycle Come

Heat cycles come at different times for different dogs. Small breed dogs come into heat sooner – oftentimes much sooner -than large breed dogs. That being said, there are generalities you can expect when your dog will come into heat.

The average age of a dog having her first heat is about 6 months of age, but that’s not always the case. Remember, even generalities have exceptions, and your dog may not reach sexual maturity in the time you expect. 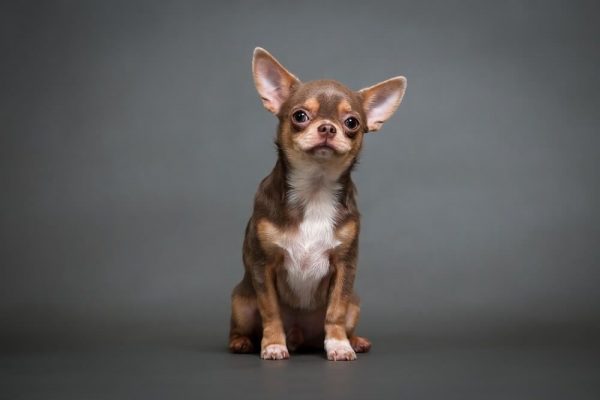 Medium-sized dogs like Labrador Retrievers generally go into heat in that 6-month range. However, it can be up to a year before they have their first heat. 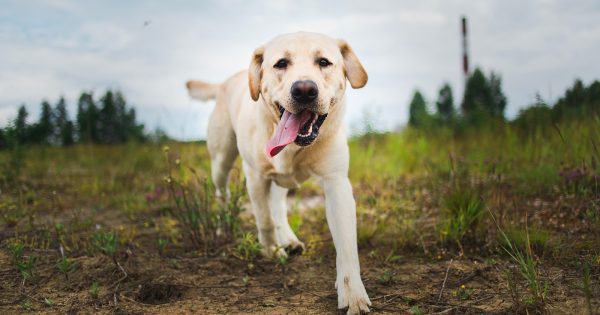 Owners of large breed and giant breed dogs tend to be the ones that have heat cycle scares. That’s because large breed dogs may not have their first heat until two years of age. Again, it seems counter-intuitive that the shortest-lived dogs would have the latest starting cycles, but that’s how it happens. While a dog’s first heat cycle occurring first at two years is rare, it’s not unheard of. 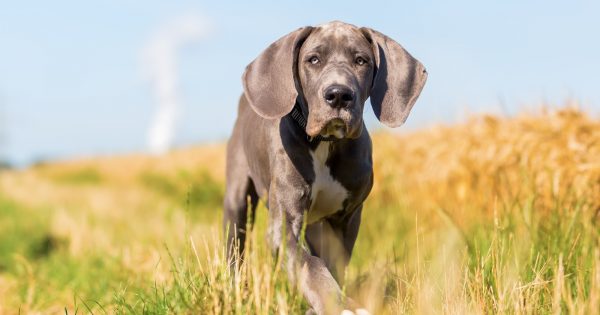 How long does the first heat cycle last?

Once your dog comes into her first heat cycle, the next big question is how long will it last. Again, this varies from dog to dog, but you can expect her to be in heat for about two to three weeks on average.

When Should You Worry About Your Dog’s Heat Cycle?

The time it takes for a dog’s first heat cycle can vary greatly depending on her size and even her breed, and while there’s generally nothing to worry about, there are times when a trip to the vet might be in order.

If your dog’s first heat cycle hasn’t come at around 8 months of age, but you don’t see any signs of sickness, don’t worry.

However, if your dog hasn’t had her first heat, and she appears off in any way, it’s a good idea to take her in to see the vet. Always err on the side of caution. Chances are your dog’s first heat cycle is on the horizon, but it never hurts to check.

At the very least, your vet may be able to give you a better idea of what to expect regarding your dog’s first heat and give you a little piece of mind.

Before we close out, let’s just go over a few of the most common FAQs about a dog’s first heat.

Do puppies bleed on their first heat?

Yes, puppies bleed even during their very first heat.

Does a dog bleed the whole time in heat?

No. Typically, your dog will only bleed for 7-10 days of her heat cycle.

How do dogs act before their first heat?

Behavioral signs of first heat include restlessness, mild loss of appetite, more frequent urination, and lack of recall (running off even though she usually comes when called). They may also be irritable and quicker to snap.

Do female dogs get moody before going into heat?

Not always, but yes, female dogs can get moody before starting their heat cycle thanks to the surge of hormones flooding their bodies.

Is a dog’s first heat painful?

No, being in heat isn’t painful per se. However, like humans, female dogs could experience some cramping and discomfort during the proestrus cycle. If your dog is exhibiting signs of pain, contact your veterinarian immediately to rule out a uterine infection or other health issues.

What are the 4 stages of a dog in heat?

We went over these above in more detail, but as a quick summary, the 4 stages of heat are proestrus, estrus, diestrus, and anestrus.

How long is too long for a dog to bleed? Can a dog bleed for 3 weeks in heat, for example?

While rare, some dogs can bleed for 3 weeks during their first heat cycle. However, by the end of the 7-10 days, it should be more of a pinkish watery discharge than full-on bleeding. If it’s not, contact your vet. Chances are she’s fine, but it’s better to err on the side of caution.

Should I spay my dog before or after her first heat?

Most experts agree that spaying before the first heat is best because it drastically reduces the risk of your dog developing breast cancer down the road, and we’re inclined to agree with them. However, some vets recommend waiting, especially if you have a giant-breed dog. Your best bet is to talk to your veterinarian. Vets have far more experience and knowledge than a random dog blog on the internet when it comes to which dogs should wait versus which shouldn’t.

Have you ever gone through a heat cycle with your dog? Share your tips and experiences below!