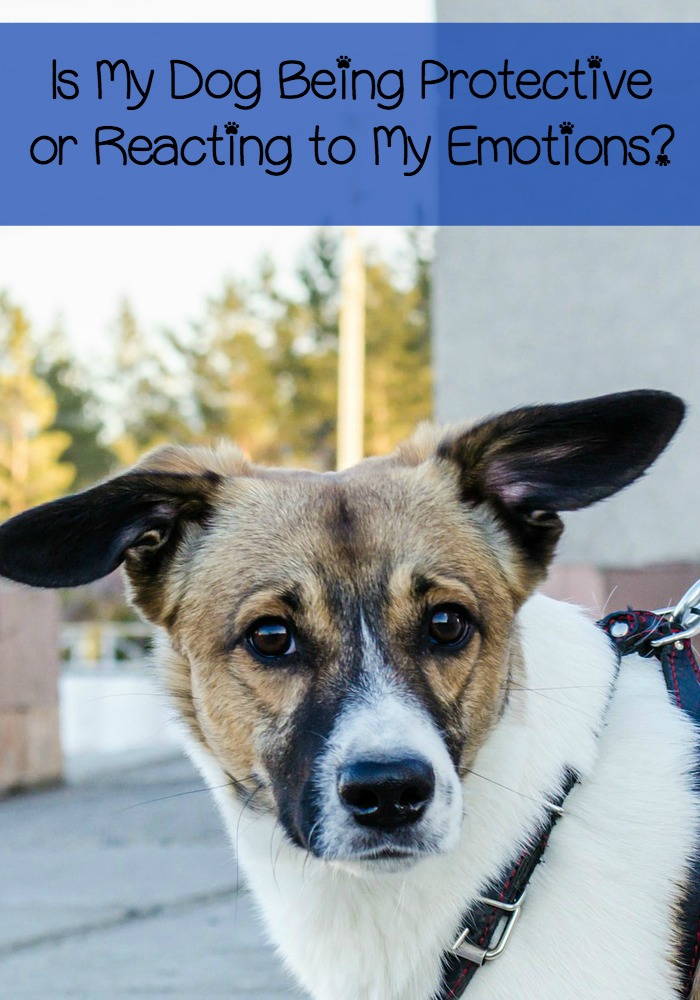 If your dog has ever stood between you and another person, you might have wondered, ‘Is my dog being protective or reacting to my emotions?’  Our first thought might be that he is protective, but that might not be what he is doing. He could be reacting to the “vibes” that you’re putting out.

I am sure you had heard stories of an owner’s dog knowing she was pregnant before she knew, or sensing danger and knowing he needs to get his family out of harm’s way (such as a house fire).  Dogs often pick up on our feelings as well, probably more so than we think.  When my grandfather passed away, I remember sitting in my room, crying and my dog came in and just put her head in my lap.  She knew exactly what I needed.

Related: How to Tell if Your Dogs Are Playing or Fighting

Is Your Dog Being Over-Protective?

One of our doggie readers wrote to us concerned about how her dog will often stand in between her and another person, simply to keep a safe distance between the two humans (is what she is guessing).

I have a issue going on a with my dog, every time someone comes near me he blocks them not in a aggressive manor but to keep distance between and others. I don’t understand what is going on with him, is he trying to be possessive or doesn’t trust people near me? I get very nervous when people get close could he be picking up on this ? I was raped and beaten years ago and cannot stand people close to arm reach of me.

Her concern is that her dog does not trust others to be near her and that he is overprotective.  Which is a good conclusion one might make based on that information, however, she opened up a little more and admitted that she had been beaten and sexually assaulted a few years back, and she has a very hard time with people standing within arms reach of her?

I can only imagine the anxiety that must well up inside and of her!  Once I read that little bit of info, it was like a light had turned on.  That lovely dog of hers can sense what is going on inside of her and is trying to make her feel more comfortable, by forming some distance between her and whoever she is talking with.  Smart dog.

When I had my daughter, and she was still an infant, I was sitting on her front porch, and there were about four dogs there, mine included.  They were all playing so nicely, running around and catching each other, until they came to the porch.  My dog instantly stood in front of my baby and me and suddenly didn’t want the other dogs near her.  I wasn’t aware of what she was doing until someone pointed out, ‘You are holding the baby, she doesn’t want the other dogs near her’.  That made perfect sense!  She was protective in a preventive manner.  She was not in any way being aggressive, but she was letting the other dogs know to stay away.

What dogs can sense that we can not, never ceases to amaze me.  You may have heard that if your dog does not like someone, maybe you should listen to him (I know I should have taken this advice on more than one occasion.  Hindsight is 20/20).  The saying ‘Dogs are man’s best friend’ wasn’t coined out of thin air, there is something really great to be said for the bond we share with our four-legged friends.

Related:5 Famous Quotes That Eloquently Express Our Love for Dogs

To answer the original question “is my dog being protective or reacting to my emotions?” it really depends on the situation. If your dog is constantly blocking you from people, growling or getting aggressive, then he’s being over-protective. That’s definitely a behavior that warrants some one-on-one dog training with an expert. On the other hand, if you notice that your dog shows this behavior mostly when you’re feeling nervous or uncomfortable yourself, it’s like that your pooch is picking up on your vibes and acting accordingly.

Do you have any stories to share about a time it seemed like your dog was being over-protective, or sensed something before you did?  Share with us in the comment section below!  We love stories!