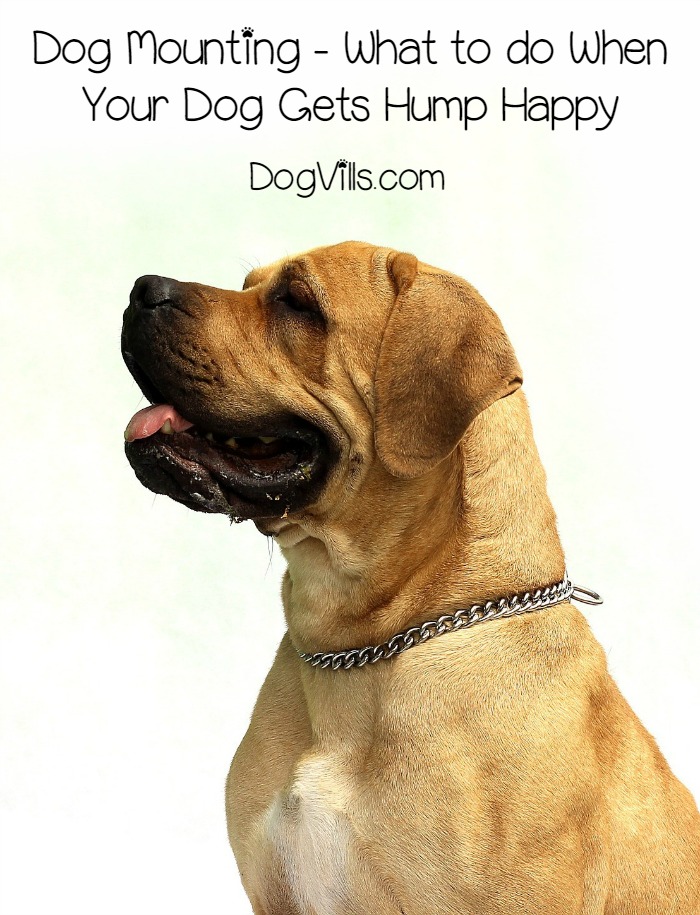 Dog mounting is a behavior we’ve all seen at least a few times in our lives. If you don’t know what mounting its, you’ll probably recognize its other name – humping. While humping my look like it’s about procreation, dog mounting is actually about dominance more often than not.

Related: What’s the Deal with Urine Marking & How Do You Stop It?

Dog Mounting – Why do They Do It

It’s all about dominance, and not necessarily in an aggressive way. When a dog mounts another dog, he is expressing his rank in the social hierarchy. You’ll also see this behavior frequently when dogs play. Again, even in those circumstances, it’s about letting the other dog know who’s boss. Think of it like this. Pinning a dog to the ground to establish dominance is the dog version of me punching a guy in the face because he won’t stop messing with me. Mounting to establish dominance is the dog version of me calmly taking my place back in line after some jerk cuts in line. I’m not getting into a scrap, but I’m also not having it.

What to do About It

How you handle a humping dog is really determined by the situation. Obviously, it’s better if your dog doesn’t do it at all, but that’s probably NOT going to happen. There are some behaviors that are so difficult to train out of a dog; you’d have to be Caesar Milan to do it. And even then, maybe not. So let’s look at dog mounting in the context of dogs who know each other and dogs who don’t.

When the Dogs Know Each Other

If you have a couple of dogs, or if you have a dog that frequently plays with another dog you don’t own, you probably don’t have a lot to worry about. If your dog begins to hump the other dog or vice versa, don’t freak out. It’s a totally natural thing. Remember, dogs can pick up on your vibe, so if you freak out over it, you’re going to inject tension where there wasn’t any before.

If the dogs know each other well and get along, don’t even worry about it. Most likely, the whole thing will be over in a few seconds, and they’ll be back to business as usual. Remember, it’s a natural, non-sexual thing for the dogs. People are the ones who get nervous or grossed out. As long as that vibe isn’t put out, all will most likely be well.

If it looks like there might be a tussle, you’ll want to nip that in the bud immediately. I always advise keeping a spare toy and a spray bottle on hand for any dog-related situation. A toy is an excellent way to distract a dog from his unwanted behavior without having to put your hands into a potential dog fight. A spray bottle is an excellent way to startle a dog out of unwanted behavior if he doesn’t listen or go for the toy.

When the Dogs Don’t Know Each Other

If you see a dog mounting situation happening between your dog and another dog at, say, a dog park. The best course of action is to first assess the situation. If the dogs seem happy and playful, you just see a fly-by hump, and you should just go with it. If the dogs aren’t upset, there’s not a reason to possibly upset them by reprimanding you dog. The stern voice could cause a fight. It doesn’t take much sometimes.

If either your dog or the other person’s dog looks like they’re gearing up to mix it up, bust out the toy and the spray bottle that I mentioned earlier. And never, ever forget this. Do not, under any circumstances, ever put your hands into the middle of a dog fight. All it takes is one bite to lose digits and/or mobility.

Dog mounting is a totally natural behavior, and nine times out of 10, you’re going to have zero problems when this behavior occurs. Dog mounting is the friendly way for a dog to establish the pecking order, and it rarely results in anything more than a brief wrestling match, if that. There’s always that 10th time, though. When you see dog mounting behavior, just stay calm and assess the situation. Stay on your toes and ready to intervene, but don’t act nervous. That sort of vibe can turn a perfectly friendly interaction into a ringside seat of Thunderdome.

Have you ever dealt with dog mounting issues? Tell us your experiences below!