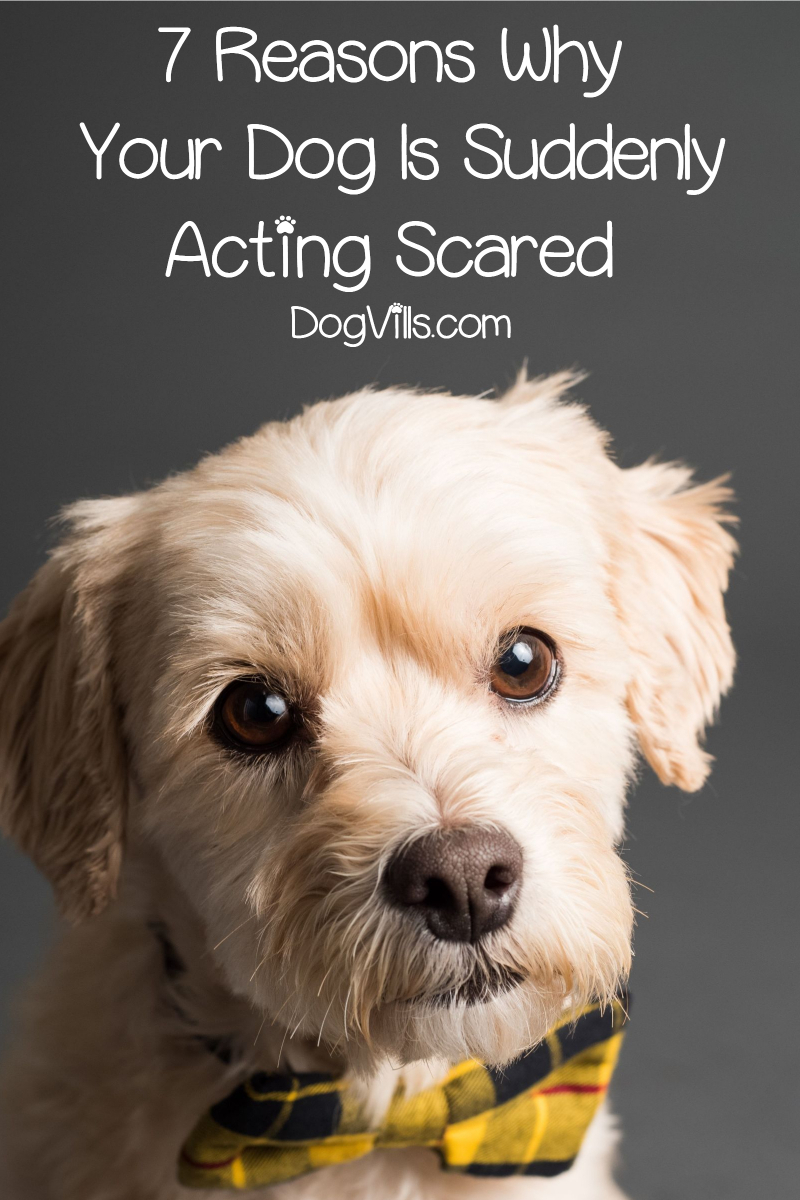 Let’s talk about some reasons for why your dog is acting scared all of a sudden.

I know it’s a common question among my fellow dog-loving friends.

If your pup is suddenly terrified of his own shadow with no apparent reasons, you may wonder what’s gone wrong.

Then you might be going out of your mind trying to figure out how to help your scared dog.

Fortunately, I’m here to ease your mind and offer you seven probably causes of sudden fear in dogs.

Related: My dog is acting strange and hiding. Why?

One of the worst things for any dog owner is to see their pet cowering in fear without having any clue what’s going on.

Unfortunately, dogs can’t tell you what had made them so scared, until someone invents that dog-to-human translator.

However, if you know how to read your dog’s body language, you might be able to make a pretty accurate guess.

Let’s see what usually makes dogs terrified all of a sudden.

One of the most common reasons why your dog is acting scared all of a sudden is a phobia.

Dogs don’t form memories as we do, but they tend to remember negative/positive experiences strongly.

Phobia of noises is very common in dogs and often involves fireworks and thunderstorms. The bright lights, the flashes, and the ear-piercing noise freak dogs out of their minds.

Usually, a dog with a phobia will pant, whimper, pace, and show signs of anxiety and stress.

In addition to noises, sometimes dogs develop a phobia of objects or places.

For example, Rover might be reluctant to step into the kitchen or approach the TV.

So something must have startled your pooch so badly that he is afraid to go near the object or the place.

A fearful experience during your daily walk also might make Rover refuse to leave the house and act scared whenever you grab the leash.

In these situations, fear is a learned behavior. So you can desensitize your dog to whatever is frightening him with enough patience and tasty rewards.

For example, if your dog is acting weird and scared due to fireworks or thunderstorms, you can try to get him used to loud sounds.

You could try to drown the noise with other familiar sounds or relaxing music (like in the video below). You could also isolate your pooch in a room away from the commotion and let Rover calm down.

Usually, a sudden change in behavior is a red flag for most dog owners. Since dogs can’t complain that they’re sick or in pain, they act strangely.

When dogs are not feeling well, they tend to hide until they start to feel better.

However, some pooches might get scared all of a sudden when they are in pain because they don’t know what’s happening to them. You’d be afraid in a similar situation too.

Observe your dog for other signs of illness such as lethargy, vomiting, diarrhea, fever, or lack of appetite.

It’s not always a serious illness that makes your dog afraid, but you’d want to get to the root of the problem.

Take a look at some of the other warning signs that your dog may be sick:

All dogs bond with their owners. But some pets form such a tight bond that they can’t stand it when their human is away.

This condition is called separation anxiety, and some breeds are prone to it.

Some dogs with separation anxiety bark, howl, and pace whenever they’re left alone.

Others become extra clingy when it’s time for the human to depart and seem genuinely in distress.

Usually, dogs with separation anxiety act destructively when the owner is away.

That’s why owners often overlook it as a behavior problem. But your dog is really suffering and can’t help his actions.

So, if your pooch is acting scared all of a sudden when you’re about to leave the house, it might be due to separation anxiety.

You’ll have to teach your dog that being alone is not a bad thing.

Zak George has great tips on dealing with separation anxiety, so check out his video below.

#4 Past Abuse or Traumatic Experience

When you adopt a dog, you often don’t learn their whole history and what they’ve been through.

Your dog might have been abused, and as such, Rover might get scared when something reminds him of his ugly past.

For example, your pooch might get scared when you sound angry or when there’s tension in the house.

Accidentally stepping on your dog’s tail or paws also might make your dog terrified all of a sudden.

Particular smells, tone of voice, or hand gestures also could trigger an episode of sudden fear.

Your dog might even get shy around strangers if they remind Rover of somebody who abused him.

In these situations, you’ll have to earn your dog’s trust and work on desensitizing him to the triggers.

Again, Zak George is a great resource for training a scared dog. Take a peek at his tips below.

#5 Something Is Scaring Your Dog

It’s a well-known fact that dogs have a remarkable sense of smell and that their hearing is far more sensitive than ours.

So when your dog is suddenly afraid, I say that you should check what’s happening outside your window.

There might be other dogs or predators in the vicinity. Your pooch might be acting weird and scared because he has picked up their scent. Chasing the intruders away will usually calm down your dog.

You might also have mice, termites, or other vermin in the house. Some dogs might be afraid of vermin and act scared whenever they catch their scent or hear them moving in the walls.

In addition to this, your dog may be reacting to something you can’t hear.

For example, some owners have reported that thunderstorms miles away affect their dogs’ behavior.

Other pet owners say that their dogs and cats acted oddly in the minutes or seconds before the ground start shaking.

When dogs get older, their senses are not as sharp as before. Many elder pets have trouble orientating around the house.

That’s one possible explanation of why your dog is scared all of a sudden.

Furthermore, sometimes older dogs get dementia. These dogs don’t know where they are and what’s happening.

If that’s happening to your pooch, he is bound to be scared out of his mind.

Other possible signs of dementia in dogs include aimless wandering, loss of direction, mood swings, aggression, and staring off into space.

Last but not least, sometimes dogs get scared all of sudden because they haven’t been socialized properly.

During the socializing process, puppies explore the world so that they become comfortable with all kinds of people and objects.

However, not all dogs get properly socialized. As a result, your dog might be scared all of a sudden because they’ve encountered something they haven’t been socialized to.

For example, some dogs might be afraid of people with glasses or crying children.

Dogs might get scared for many reasons, and it’s not always easy to identify the culprit.

But once you do, you can work on getting your dog the help he needs to live a life free of fear.

What do you think about these reasons why your dog is acting scared all of a sudden? Tell us in the comments.