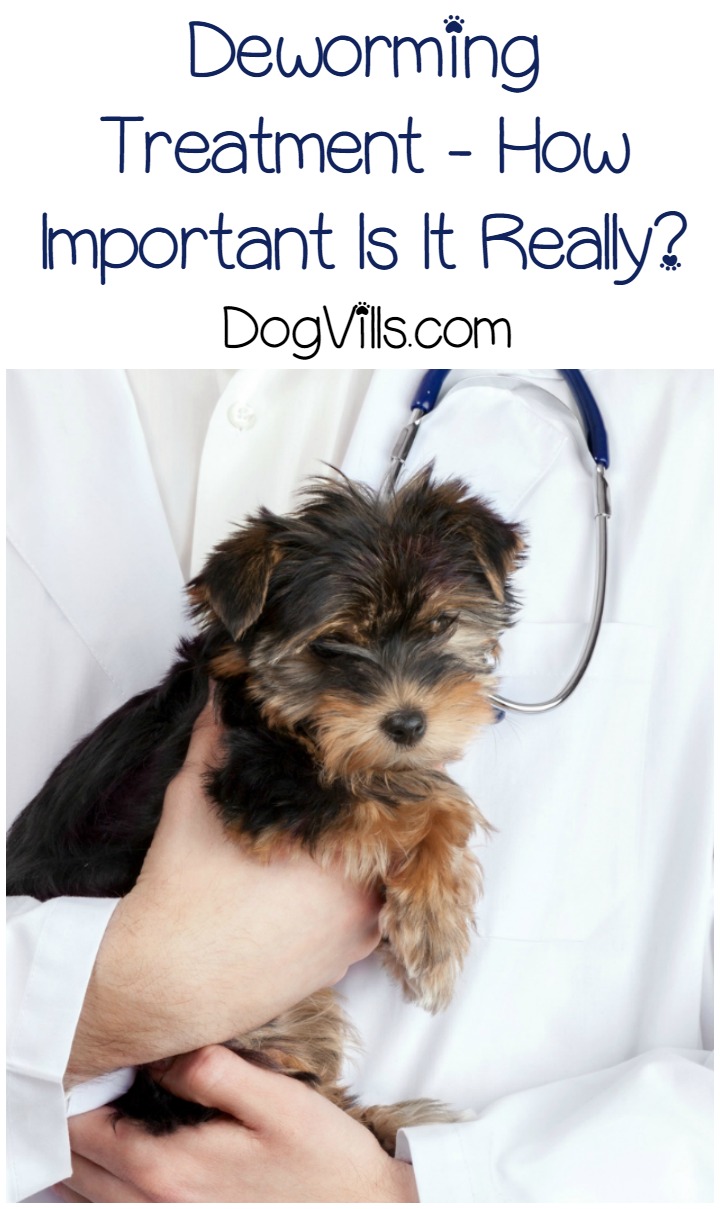 Deworming is something you probably hear about a lot if you go to the vet.

Deworming treatment kills any intestinal parasites living in your dog, and most vets recommend giving a treatment every three months.

The question I was always asked at the vet was, “Do I really need to do that so much?” Is deworming puppies necessary?

Well, there’s a clinical answer, and there’s a practical answer. First, let’s take a look at the question that inspired this post, then we’ll get to both answers.

Does anyone really deworm their dog every three months?

The question that I mentioned above came from one of my favorite dog groups. The dog parent wanted to know if you really have to deworm your dog as often as some suggest.

A quick search on the internet suggests you worm your adult dog every 3 months. Does anyone actually do that? My dog is 5.5yrs old and hasn’t been dewormed since her puppy worming. Edit. She doesn’t have worms either. Never has.

Like I said, there are really two answers to that question. Let’s talk about them.

So here’s the thing about this particular preventative measure. Its importance really depends on your lifestyle.

For example, if your dog only has access to a fenced backyard, you probably don’t need to deworm him four times a year.

However, if you have an “outside” dog or if you live in an area that makes it possible for your dog to range, you’ll want to deworm him quarterly.

So it’s very much an individual thing.

Related: Heartworm – Everything You Need to Know

The clinical answer to deworming your dog four times a year is, “Yes.”

That’s because medical best practices include prevention when possible. So if you deworm your dog every three months, you’re pretty much guaranteed to never have a worm problem.

That’s why having your dog dewormed every 3 months is recommended no matter your dog’s lifestyle.

If your dog isn’t free range, an annual or bi-annual deworming is probably going to be sufficient.

First, we have our outside dog.

That’s the free-range guy. He lives in a rural area where he can run and range and explore all day.

He roams for a mile, catching up with the other dogs in the area, chasing – and sometimes catching – small animals, eating various forms of poop, and generally having a grand old time.

This guy NEEDS a quarterly deworming. He’s the poster dog for intestinal parasites.

Between digging in the dirt, all that poop eating, and possibly being bitten by fleas, he’s at high risk for worm infestation.

Then we have our low-risk dog.

This guy is a city or suburban dog. His version of free ranging is making a circuit around his fenced-in back yard, and the only poop he has access to might be some cat nuggets in the litter box.

This guy is at low risk for getting worms.

Now that we know the vague answer to the question of how often to deworm a dog, let’s talk about a few of the most common questions that come up in regards to worming.

1. What happens when you deworm a dog?

Basically, your vet will give your dog a “broad-spectrum” medication designed to eliminate most types of worms. This can either be through an oral medication or a shot.

Once in your dog’s system, the medicine gets to work destroying the worms. The dead parasites leave your dog’s body through the natural exit (his stool).

2. What are the side effects of deworming medication?

Generally speaking, deworming meds are pretty well-tolerated by most dogs. While there are always exceptions, for the most part you shouldn’t see any major side effects.

Typically, at worse your dog may lose his appetite for a few days. He may even vomit or have the runs. However, this usually subsides quickly.

3. What’s the worse case scenario if I don’t deworm my dog?

Not to sound dramatic, but the worse case scenario is death. Your dog can literally die from having worms.

Depending on the type of worm, you’re looking at anything from severe anemia and constant gastrointestinal distress to heart failure.

Can you? Theoretically, yes. Should you? No. It’s much safer to have a vet deworm your dog. If needed, buy your Pet’s Heartworm Medicine at Chewy Pharmacy!

Deworming is Important, no Matter Lifestyle

Whether your dog has a territory of a couple of miles or a couple of hundred square feet, deworming is important.

I personally advise having your dog dewormed every three months just like the vet says.

But if you don’t want to do that an annual or bi-annual deworming is highly recommended.

Realistically, your dog could go his entire life without getting worms, but why risk it?

How often do you deworm your dog? What type of lifestyle does he lead? Tell us in the comments.