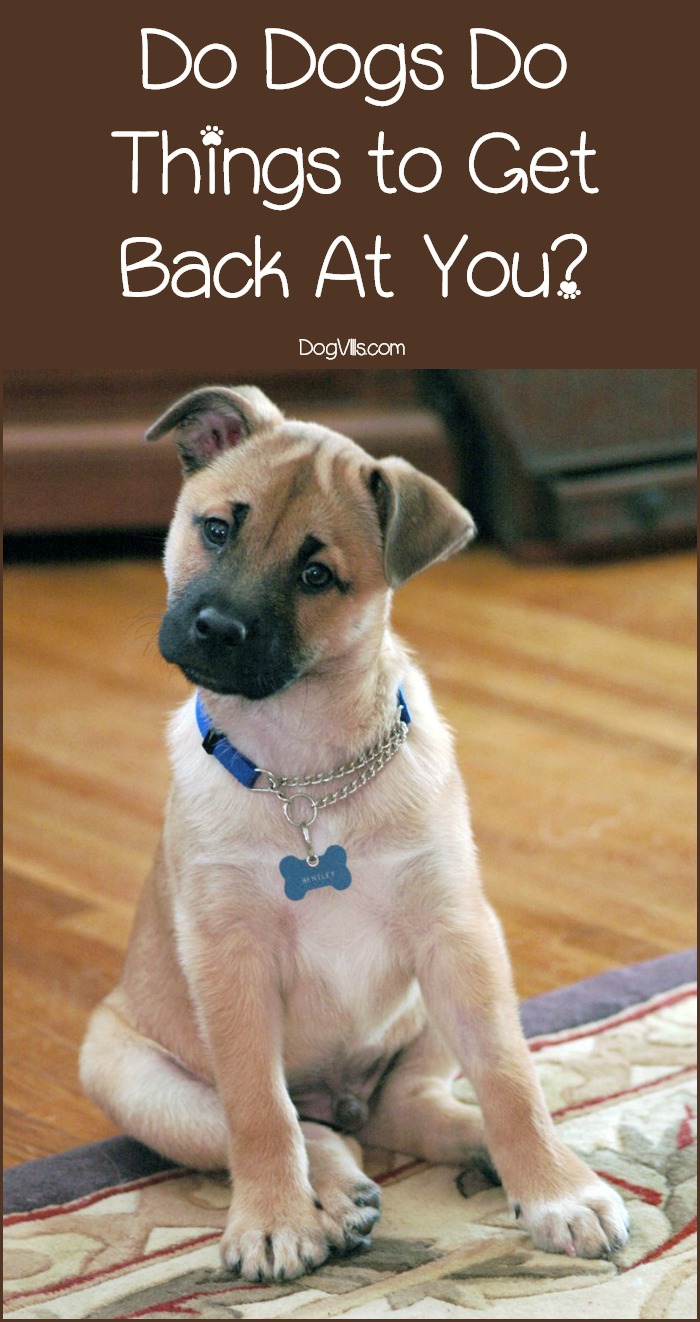 When it comes to dog behavior issues, a big question I see a lot is “Do dogs do things to get back at you?”

You tell them they can’t go out to bark, so they squat and pee right in front of you.

You say “no shoes” so they chew your favorite sweater instead.

The question is, are they doing these things with revenge in their hearts, or for another reason?

Do Dogs Do Things to Get Back at You?

Dog behavior has long been a mystery to most people. Why do they do what they do? How can we get them to do or not do certain things? What’s the deal with barking at everything?

All of these questions and more are generally asked by people either at their vet or on pet forums. We’ve talked about several different types of dog behavior in the past, but today we’re going to look at one of the most infamous things that people say dogs do – get back at us.

Related: When it Comes to Dog Behavior, It’s All Instinct!

Is Getting Back at Owners Really Part of Dog Behavior

There are two schools of thought on this, and even some behaviorists that I’ve spoken to disagree on it. So we’re going to talk about both. One school of thought says that dogs are driven purely by instinct and that anything they do – good or bad – is a product of that.

Another school of thought is that dogs are far more emotional than humans give them credit for, and they absolutely do have behaviors that stem from emotions like frustration. Even researchers differ on this subject, so while there is no definitive answer, we’ll look at both sides of the case.

The “Dogs are Driven by Instinct” Side

This school of thought says that dogs are driven by pure instinct on every level. This includes affection, protection, destruction, and everything else they do. Several studies have been done that show this to be the case. This side of the argument says that dogs absolutely do not do things to get back at their owners. Rather, they instinctively react to relieve stress.

For example, a dog with extreme separation anxiety may destroy objects in the home when his owner leaves. This type of dog behavior is his way of releasing the stress of not knowing where the rest of his pack is. Another example is a dog becoming aggressive towards another dog in the home when that dog receives affection. According to this side of the argument, the dog is simply establishing dominance over the other dog, not expressing jealousy.

The “Dogs Have Emotions” Side

The other school of thought on dog behavior is that dogs are far more driven by emotion than many humans give them credit for. As with the instinct argument, several studies have been done that show dogs have emotions and do act on them.

This side of the argument posits that dogs are highly emotional creatures and many of their “instinct-driven” behaviors are actually the result of reactions to emotion.

The most common support for this argument are dogs who do things to “get back” at their owners. While the evidence for this particular type of dog behavior is purely anecdotal, it is there. There are countless stories of owners who have dogs that seem to express frustration or benign “revenge” when it comes to actions on their owners’ parts.

There are stories of dogs who do things like chewing the end off of one shoelace when they don’t get what they want or give their owners the “stink eye” when they are chastised.

Believe it or not, even in this day and age of studying everything, dog behavior still remains a bit of a mystery. I’m no research scientist, but I’m of the opinion that it’s a little bit of both.

In some instances, like those of separation anxiety, the behavior is purely instinctual. This type of severe stress causes an instinctive reaction within the dog who cannot find his pack. In order to relieve the overwhelming stress, they dog will resort to destructive behavior. Destructive behavior can also be the result of pent-up energy of a dog who needs more exercise. This is also instinctive.

However, other behaviors seem to be the result of emotion. Some dogs, even those who are not bred to be that way, are incredibly lovy dovy, almost to the point of being out of character of the breed.

There are also dogs who seem to do things to express their displeasure with their owners over taking away objects that they shouldn’t have or being chastised for bad behavior. In these cases, it seems to be more emotionally driven.

So in closing, dog behavior is a total mystery at this point, with both sides of the argument showing reasons that thiers is the correct take on things. In reality, it feels like it’s a little of both.

What do you think? Do dogs do things to get back at you? Share your thoughts below!