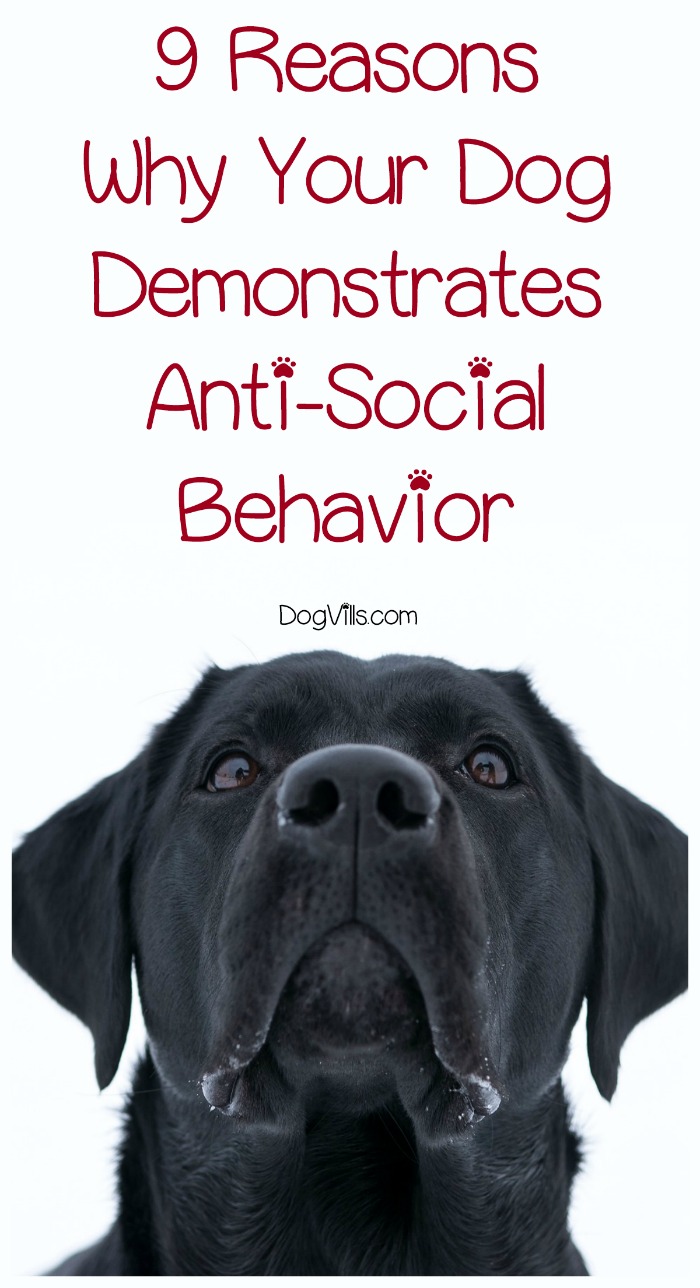 Anti-social behavior among dogs has become a leading problem that’s being discussed among dog owners and dog trainers. If you have a great social circle but your dog freaks out or tries to dominate as he comes near other dogs, it gets troubling and at times irritating.

Before you decide to shell out your hard-earned cash on some pro sessions to get ultimate tips on dog training to curb the unwanted behavior, think of different reasons behind the dog’s anti-social attitude. Once the root causes are identified, it gets easier to find targeted solutions.

Why Your Dog Demonstrates Anti-Social Behavior

Here’s a list of reasons why your dog is demonstrating an anti-social behavior:

Dogs reflect their owner’s emotions to a great extent. If the owner is antisocial or aggressive in behavior, the dog is going to mimic him to make the owner happier. If your behavior is interrupting the training process, reflect upon your personal development at first.

Besides that, aggressive behaviors by the owners often make the pets fearful, quiet and shy. They show frustration and anger to others as an outcome. Always remember to train your pooches’ positive behaviors calmly and slowly.

Many dogs suddenly change their behavior from being social to anti-social when their environments change. If you have recently moved to a new place, your dog may not have gotten a good first impression of other dogs in the area. The dog may be missing his old pals and cannot adjust to the new environment. Either the neighbor’s dog has tried to dominate your calm and friendly dog (that has created fear in your dog’s mind) or street dogs have avoided his presence altogether in packs.

Similar behavior changes can be seen in our children, who do not love the new place, new people, and new things. They miss their friends and joys.

Try to provide dogs with a comfortable and loving environment to help them adapt to the new surroundings. You can use doggy treats to encourage them to socialize and move around the place with comfort. Give some time to your dog. If the problem persists, you may hire a dog trainer.

Adopting an adult dog or a rescued dog comes with a lot of struggles and problems. Adult dogs have certain behaviors that were acceptable in their previous environment. During their puppy stage, they were trained to behave in a certain manner.

The best part is you can train him to shed off unwanted behavior. Simply, communicate with him by using positive reinforcements and by giving doggy treats when he shows a desirable behavior.

If you give your dog greater attention when he is freaked out, you are negatively reinforcing him to get your attention by such behavior. You need to give space to your dog to explore, learn, understand, and fight for himself. Being over-protective can lead to anti-social behaviors in dogs.

As in humans, dogs begin to develop an anti-social behavior as they age. Due to lack of energy and age factor, they cannot socialize with other dogs at equal levels. They may show frustration and aggression around younger dogs. It’s kind of incurable so just give your dog some space to accommodate and socialize as he wants to. Never force your choices on the dog! It’ll never work.

If your dog is suffering from cancer or any other disease that has sucked all the zeal and energy out of him, then your dog only needs your love and care.

By giving your dog a confidence that he is not sick and he may move out to socialize with other dogs, your dog will get trained soon enough. But before that, give him highly nutritious food that provides him with enough energy to move around normally.

It is best to inculcate all the desired behaviors in a dog when he is young. Training a puppy is an easy job as they can quickly adapt to new pattern and ways. Dogs that were not trained properly to socialize at a younger age will definitely show the same anti-social behavior later on.

Cute and young puppies are often over-protected by dog owners and are given lots of attention all day long, which inhibits them to socialize with other puppies.

If your dog has grown-up, you still can train him by giving him cues of what you expect from him.

Are you curious to know what these assumptions are and who makes them? It’s you! The owner sometimes misinterprets his dog’s behavior! Trainer and non-trainers have observed quite frequently that the dog owner is complaining about dog’s antisocial behavior.

“When he’s on leash and spots another dog, he sometimes barks, growls, and lunges.”

They are frustrated by the dog’s act of barking, lunging, and jumping at other dogs. However, later on, when the dogs were left free to socialize and move around, they made a whole lot of friends.

Basically, the owners wrongly interpret the barking and jumping behavior of dogs. The behavior is not a way of dominating other dogs or fearing them away. It is an attempt to communicate with other dogs and make them friends. When they find their owners pulling their leashes every time they attempt to socialize, they develop the antisocial behavior as a desirable personality trait.

Owners who fear that their dog may get hurt by other dogs during a fight or may get diseases by coming in contact with other dogs keep their dogs home-bound. It creates anxiety in dogs because of being bound and not getting a chance to socialize or invest their energies outside the home. Aggressive attitudes develop in these dogs out of frustration and they may get into fights easily because they don’t know how to socialize.

Fiona Appleton is a Labrador owner. She is the manager of https://ultimatehomelife.com/ developed to help people solve the troubles of pet ownership. She is an active advocate of animal protection campaigns. She wants people to understand that dog-behavior is reflective of our behavior and we need to understand them at deeper psychological levels.

Does your dog demonstrate anti-social behavior? What do you think caused it? What are you doing to correct it? Share your thoughts below!