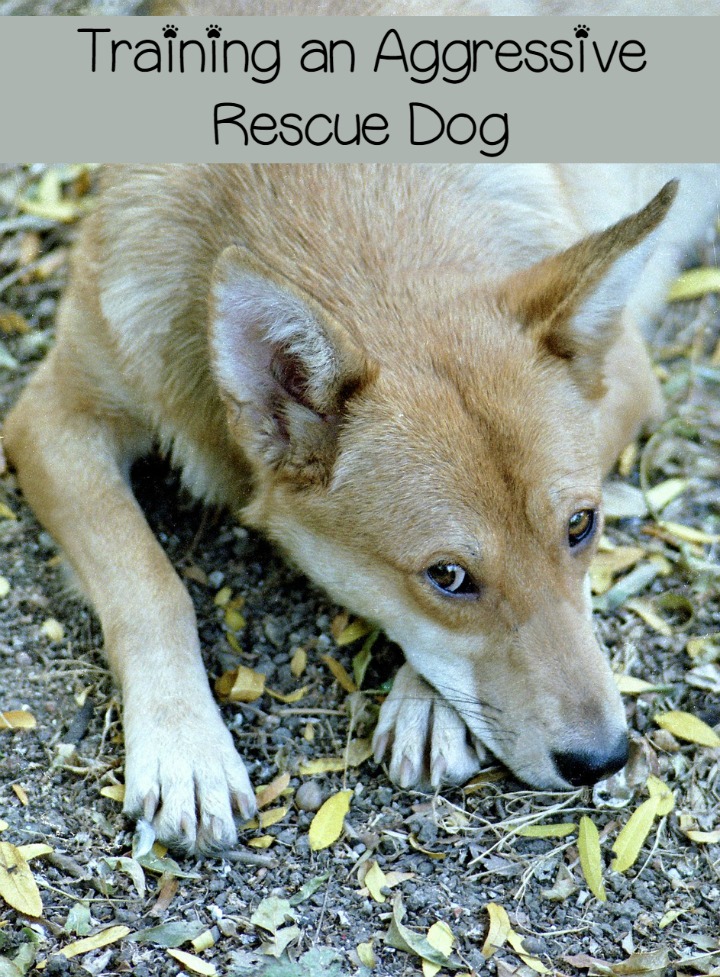 Dog aggression can come in many forms.

It can be fear-based.

It can be based in territoriality.

It can be the result of training.

However it may have been instilled in the dog, dog aggression can be a dangerous problem. This is especially true in rescue dogs.

Today we’re going to talk about how to train an aggressive dog and when it’s time to see a professional.

I read an article the other day about an owner who had adopted a middle-aged dog from an elderly woman. The woman was no longer able to care for the dog, and he got along well the adoptive owner.

The owner is having trouble because the dog was never trained in any way, and he learned that snapping and biting was an effective way to get what he wanted.

Now this owner is at a loss for what to do.

That’s why we’re going to touch on a few different ways of training and also discuss when it’s time to take your dog to a professional trainer.

Dog Aggression in All its Forms

As I stated earlier, dog aggression can take different forms. It’s important to know which form you have so you can take the proper approach to training.

It’s also important to know when you’re out of your depth.

This form of aggression occurs when the dog is frightened.

Any dog can be scared, but you’ll commonly find the aggression aspect of that fear in dogs who have been abused, trained improperly, have low bite inhibition due to breed, or a combination of these.

In these instances, the dog only wants to protect himself. Dogs only have two options – fight or flight.

A well-adjusted dog will try to cower or maybe run. A dog with fear aggression will choose the bite option if he feels cornered.

When training a fear aggressive dog, slow and steady is key.

In any case, the main lookout for a fear aggressive dog is doing anything that would frighten him.

This form of dog aggression is all about ownership.

If a dog with this type of aggression feels that something is his, he will guard it vigilantly.

It could take the form of being aggressive towards visitors in the house, or it could be guarding his favorite toy. It could even be becoming overly protective of the children in the family.

Training a dog with this form of aggression requires great care.

If you are very experienced in dog training, you might have a shot.

Desensitization is key with aggression of this sort. Start out small and work your way towards larger things.

After you’ve mastered that, you can move on to having one person your dog knows to come over.

Keep your dog on a lead so he can’t lunge. This gets him used to people entering the home. Show your dog that this person is accepted and is not an intruder.

This form of dog aggression requires your dog to trust your ques.

If you aren’t comfortable with this, seek out the advice of a dog trainer with experience in aggression.

It hurts my heart to say this, but we had a few clients come into the vet where I worked who were proud of the fact that their dogs were trained “guard dogs“.

I have that in quotes, because what they really had were dogs who had been taught pure aggression.

This form of dog aggression is one of the worst because it has been trained. That means it’s been ingrained in the dog that their behavior is not only good, it’s appropriate.

A true guard dog only attacks on command or when a family member is actually threatened.

What most people do is train their dog to be aggressive in general.

In my opinion, this form of dog aggression always requires the help of a professional dog trainer with extensive experience training aggressive dogs.

This form of aggression is simply too dangerous and unpredictable for anyone but a professional to tackle.

Dog Aggression – When to See a Professional

A professional dog trainer can be a great help with all forms of dog aggression.

If you aren’t comfortable with specialized training, don’t even attempt to do it on your own. You’ll only make a fear based biter more fearful, and you’ll make a territorial or trained aggressive dog that much more aggressive and prone to biting.

Dog aggression doesn’t mean you have to give up your pet. It just means you need the proper training to help him get back to the great dog he started out as.

Have you ever dealt with dog aggression? Were you able to train your pooch on your own or did you seek professional help? Tell us your experiences in the comments.