Cancer in dogs is quite common, especially among older dogs.

When I worked at the veterinary clinic, the vet once said, “If cancer isn’t on your differential for older dogs, you don’t know what you’re doing.”

Of the fifteen dogs I’ve owned over the course of my life, seven have had cancer of some sort or a tumor that eventually led to death.

Today, I came across a heartbreaking post from a dog owner whose pooch has hemangiosarcoma of the spleen.

She was asking if surgery – an option given by the vet – was worth it for her dog.

Unfortunately, the answer to this is only a solid “that depends.”

I have more personal experience than I’d like in this area, so today, we’re going to talk about cancer in dogs and when enough treatment is enough.

RELATED: Signs a dog is dying of cancer

Types of Cancer Treatments for Dogs

Before we talk about how to decide when enough is enough, we have to understand what each treatment entails. Let’s talk a bit about the four main types of cancer treatments for dogs.

Let’s take a closer look at each treatment option. You’ll notice that they are pretty much the same as treating cancer in humans.

Well, as most of you know, Daisy Dee underwent surgery for lung cancer. They removed most of her lung and 4 ribs from her left side. She’s having a rough go at recovery. Much more than I thought for such a tough little dog. Thanks everyone for your thoughts and prayers for her. She’s such a sweet and loving pup. #cancer #cancersucks #dogcancer #dog #ratterrier #terrier #sweetheart @gcr1986

Surgery to remove the tumor and some of the surrounding tissue is usually the first thing your vet will recommend.

Just understand that while surgery can completely remove the cancer in some cases, that is not always the case. Surgery is the first step, but not the only one.

Before surgery, your vet will run a battery of tests to make sure your pooch can tolerate it.

This includes blood tests, x-rays, and other screening tests. Your vet may even recommend other treatments first to shrink the tumor.

See this happy face?!! This is the face of a pup who kicked cancer's butt!! 😀💪👊 Had my final chemo treatment today and my ultrasound showed no signs of cancer! Cheeseburger and pupcake to celebrate! THANK YOU to Dr. Lew and everyone at Medvet who made me love going to treatment and thank you for all the well wishes from all my followers along this journey. 🤗❤

Chemotherapy is an aggressive drug therapy that uses medications known to kill off cancer cells.

Unfortunately, it’s so aggressive that it can also kill off healthy cells as well, which leads to many of the negative side effects associated with the treatment.

The side effects vary depending on the type of medication used, but may include:

When most people hear “chemo,” they often think about hair loss as one of the biggest side effects. This isn’t so common in dogs. He may lose whiskers, but only a few breeds experience major hair loss.

Radiation therapy is exactly what it sounds like: a treatment that uses radiation to target the cancerous areas and shrink the tumor and/or destroy the sick cells around it.

Many vets will use radiation to shrink a tumor before surgery. It’s typically well-tolerated by dogs, but side effects can occur.

Immunotherapy is a relatively new type of cancer treatment for both dogs and humans.

The first immunotherapy cancer treatment for dogs was developed just four years ago in 2014.

Basically, immunotherapy uses antibodies to fight cancer cells, much the way your immune system goes into action when you contract the flu virus.

Since it’s such a new treatment, you may need to find a specialist that’s up to date on cutting-edge treatments.

Now that we understand the four basic types of cancer treatment for dogs, let’s talk about how to approach cancer and decide when enough is enough.

How to Approach Cancer in Dogs

Brinkley was diagnosed with lymphoma cancer last week. I thought I was going to lay him to rest on Sunday April 28th. Thankfully I didn’t have to because as of right now he is reacting well to the medication and I have my sweet spunky boy back. My Time with him is limited, but I am extremely grateful for the added time. I will give him the best life I possibly can! Go Brinkley Go! Keep him in your prayers Please! ❤️ #goldenretriever #dogcancer #iloveyou

When you get the dreaded diagnosis from your vet, your mind will whirl with possibilities, fear, doubts, and all the rest that comes when you hear such horrible news. After that passes, it’s time to get down to the serious business of making decisions.

These are all important questions with no definitive answer. I think it can best be described with a story of my own dog, Pepper.

The Story of Pepper and Subcutaneous Hemangiosarcoma 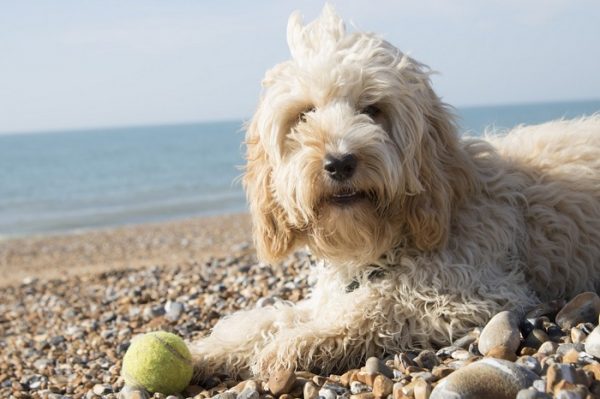 Pepper – otherwise known as Potty because he always peed on the carpet – was an incredibly loving and sweet Cockapoo. He was the best dog I’ve ever had.

At only nine years old, he was diagnosed with subcutaneous hemangiosarcoma, a cancer of the blood.

In his case, it was confined to his rear leg when we found it. Our vet told us there were treatment options like radiation and chemotherapy to be tried, but that at most, he’d only have about six months to live.

We made the decision to give him radiation and chemotherapy treatment.

We weren’t ready to let go.

Over the course of several weeks, we took him downstate to a veterinary hospital and gave him his treatments.

Looking back, I can see that our decision was a selfish one, but out of our desperation, something amazing happened.

That little bugger started to get better. His cancer didn’t fully remit, but it stopped growing.

For a year, there was no tumor spread at all.

Then it began to spread very, very slowly – incrementally slowly. We managed his pain with medications, and he remained his happy-go-lucky self that we’d always known.

Fast forward a couple of more years and cancer had eaten up his leg but had still remained localized. So we made the decision to amputate his leg at the hip purely to manage the pain in his leg which had become incredibly intense for him.

After a week of recovery, he was running around the house like nothing had ever happened.

He then went on to be pain-free and relatively cancer-free for years again.

Finally, the day came – as we knew it would – that cancer metastasized to his lungs.

We managed his discomfort for about a week, but it got to the point where he mostly laid around and panted, and we knew it was finally time.

I took him in, said goodbye, and watched him close his eyes for the last time.

It was sad, but I looked back and realized something amazing. Our dog had been giving six months to live, but he survived with an incredibly good quality of life for six YEARS.

What Was the Point of This Story?

The point here is that when approaching cancer in dogs, it’s all very individual. You have to weigh possible positive outcomes with the possible pain and/or side effects that come with treatment.

Logically speaking, our family probably shouldn’t have put Pepper through that treatment, but happily, it worked for him. That won’t always be the case.

Sometimes, all the treatment in the world won’t appreciably change the final outcome.

So when dealing with cancer in dogs, you have to ask yourself if your dog’s chance at a positive treatment outcome is great enough to warrant treatment – however aggressive it may be – or if it would be better to just let him cross the rainbow bridge at a point when he’s in relatively high spirits and relatively little pain.

It’s an incredibly hard decision and one that can really only be made by you with the help of your vet.

Never ever play the what if game.

Make the best decision you can at the time and know that you did the best you could for your furry friend.

After seven years at the vet, I learned that what if’s can absolutely wreck your mind.

Have you ever dealt with cancer in dogs? What decisions did you make? What advice can you offer others going through it? Share below.