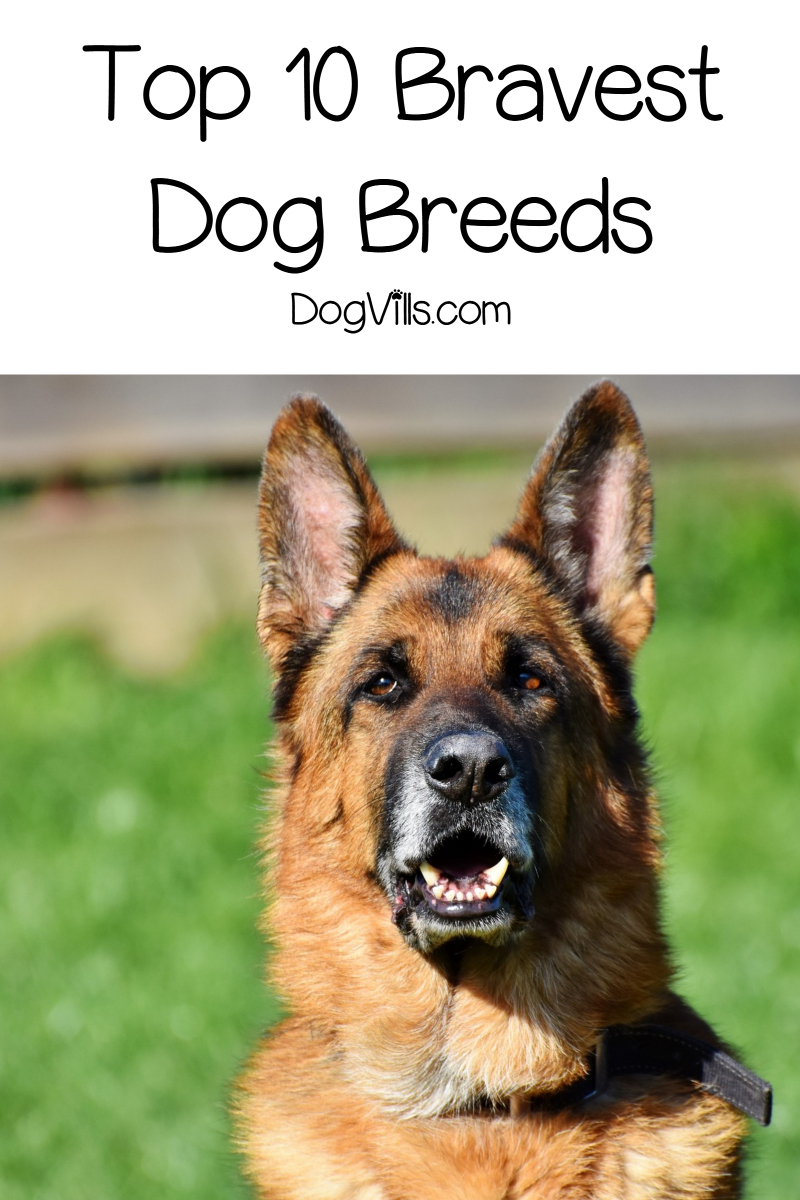 If you’re looking for the bravest dog breeds, I have some news for you: every dog is capable of great bravery!

From the tiniest chihuahua to the greatest of the Danes, they’ll all go above and beyond to protect their families when necessary.

However, there are a few breeds that have a solid reputation for being particularly courageous.

Let’s take a look at ten that come to mind, shall we?

What are the Bravest Dog Breeds?

Before we talk about the bravest dog breeds, I feel like I need to remind you that every dog is unique.

It’s possible to find dogs off this list that are equally as brave, or dogs on this list who are scared of their own shadow.

Also, size doesn’t necessarily matter when it comes to bravery.

I’ve read about a chihuahua going up against a bigger dog to rescue kittens, and I’ve also known great big breeds who were total scaredy cats!

With that in mind, the following is a “loose” list of the bravest dog breeds. In other words, don’t go carving it into stone!

We can’t talk about the bravest dog breeds without mentioning the German Shepherd.

After all, it’s the first breed that comes to mind when we think about police dogs!

They’re happiest when they’re working, so give them a job that lets them show off their bravery (in a safe way, of course, unless you’re training a police dog).

If you need more convincing about their courage, check out this sweet video of a GSD named Finn receiving an award for bravery:

Did you know that many of the military dogs we think are German Shepherds are actually Belgian Malinois?

Early socialization and training will help you deal with that tendency to chase cars, cats & kids.

They are quick to learn and eager to please, so as long as you’re diligent early on, it shouldn’t be a lifelong issue.

While heartbreaking, this video below about Kuga shows just how brave these dogs really are:

The Cane Corso is a strong and powerful dog with a lineage dating back to ancient times where they were used as guard dogs by aristocrats.

My dear friend had a Corso that passed away recently. She was a very sweet dog…but also a formidable presence around strangers.

Early socialization is super important with a Cane Corso. You want to get them used to as many people as possible so they learn that not everyone is out to get their family.

Check out the video below to learn more about the Cane Corso:

I feel like we can’t talk about the bravest dog breeds without mentioning the Collie! I mean, how many times did Lassie save Timmy from that well?

Okay, so that was a fictional dog, but news stories are filled with real-life courageous collies, like this one about Bobbie the Wonder Dog, who trekked 2,800 miles to find his family.

As far as the eye problems go, highly reputable breeders do a lot of genetic screening to greatly reduce this risk.

If you’re curious about the story of the world’s most courageous fictional collie, check out this video:

Okay, so “pit bull” isn’t technically the name of a specific breed, but rather a catch-all for bull terriers, American Staffordshire terriers and other similar dogs.

Pit bull dogs have an unearned reputation for being violent killers. This simply isn’t true. In fact, they’re quite brave, loyal and loving!

You’ll have to train people in your life to let go of the notion that pits are bad dogs, but it’s totally worth it.

Watch this brave pit rescue his boy from a snake!

Another breed that has a rep for being dangerous and menacing, the Dobie is actually a lot friendlier than he looks!

The AKC calls him one of “dogkind’s nobleman,” and it’s easy to see why. From his powerful stance to his bright, intelligent eyes, he’s definitely a king of kings!

Because humor is the spice of life, here’s a hilarious video of a Doberman defending his family against an army of gnomes!

The largest of the Schnauzers (in case the name didn’t give that away!), this beautiful hypoallergenic breed is both bold and valiant.

The mighty breed can stand up to 27″ tall and weight up to 95 lbs, so while he’s smaller than actual “giant” breeds, he’s still bigger than, say, your average lab or GSD.

I’ve never actually seen a giant schnauzer, but my aunt had two miniature Schnauzers and I can attest to the breed’s intelligence!

Check out the video below to learn more about the Giant Schnauzer!

Rottweilers, or “Rotties” as their fans affectionately call them, are another of those “totally misunderstood” breeds.

They look fierce and imposing…right up until they smile! Then, it’s easy to see their inner goofball come out.

Want to see their bravery in action (along with a hefty dose of “awww”)? Check out this sweet compilation of Rotties protecting babies & kids:

You don’t have to look far to find stories about brave labs protecting their families!

From fiction to fact, labs have a long reputation for being loyal beyond measure to their families! There’s a reason they’re the #1 most popular dog in America!

Most of the “labs saving their humans” videos were just too heartbreaking to watch (like this one, and don’t say I didn’t warn you).

I’m not here to make you cry, so here is a funnier one that shows off their bravery!

Don’t let the petite size of the dachshund fool you! They may be small in stature but they’re ginormous in bravery!

After all, they are originally bred to hunt badgers, one of the world’s most fearless creatures!

While being overweight is bad for any dog, it’s especially dangerous to the dachshund because of his body shape.

Once again, the majority of the “brave dachshund” videos are just too heartbreaking to watch (like this guy who gave up his life to save his family from a snake).

So, to avoid making you bawl your eyes out like I just did, check out this one with a tiny little dachshund pup “saving” his girl from a bully:

Like I said earlier, any dog is capable of great acts of courage, so if your pup didn’t make the list of the bravest dog breeds, don’t take offense!

Your turn! Tell us your picks for the bravest dog breeds! I’d also love to hear about acts of courage from your own pooch! Share below!