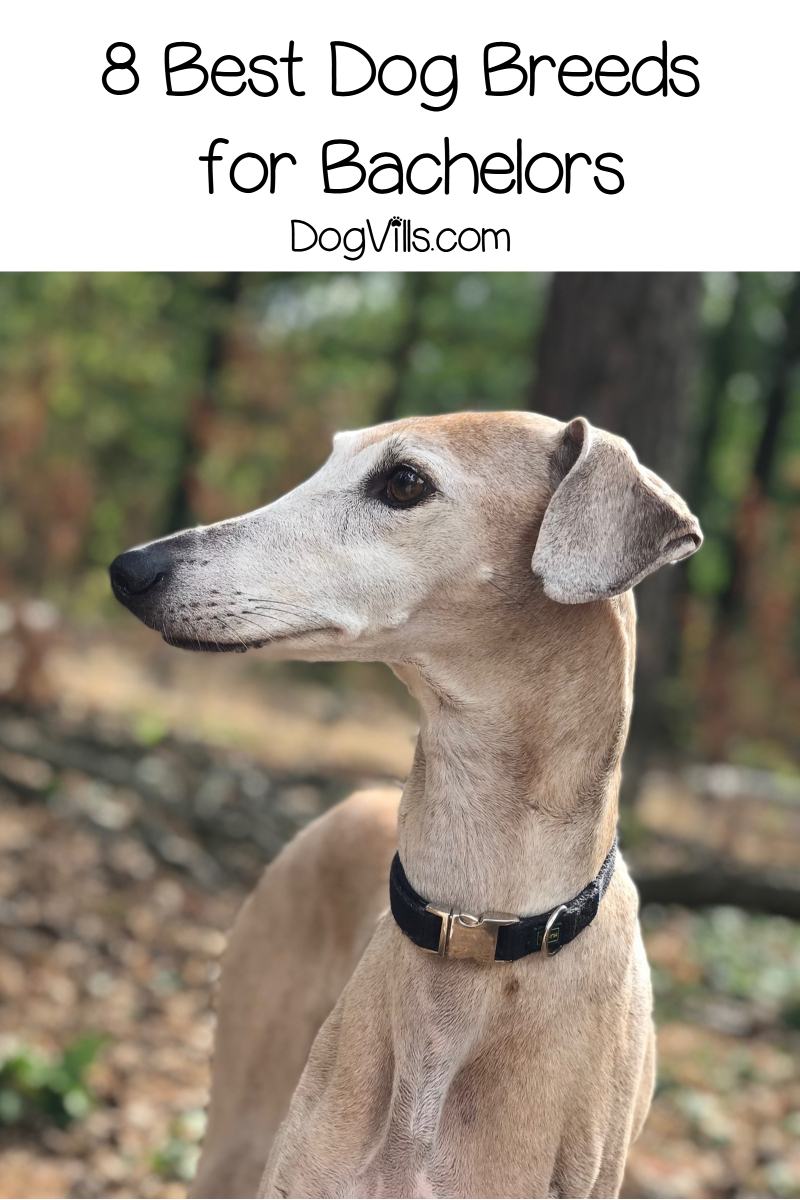 “What are the best dogs for bachelors?”

“Does that answer change if I’m living in an apartment?”

Some dog breeds are more suitable for families than single people, while others do better in houses than apartments.

So, you’re right to ask these questions.

To help you find the right breed for you, here are 8 best dog breeds for single men.

What is the best dog for a single guy?

That’s a hard question and depends on what you’re looking for in a dog breed.

Some men chose their dog based on appearance and masculinity.

Others are more practical and want a dog that doesn’t shed much, adapts well to an apartment, or doesn’t make a mess in the house.

So, for this list of the best dog breeds for bachelors, I’ve selected dogs that bond closely with their owners and are fairly low-maintenance overall.

Oh, and of course they’re all super cool dog breeds for guys!

While Labradors are often chosen as family pets, they’re also an excellent choice for bachelors.

Labs are cheerful, playful, and energetic and don’t mind being the single pet as long as they get enough attention.

Moreover, Labradors the perfect companion if you love jogging and hiking since they’re fairly active.

They’re also a very sensitive breed and will stick close to you when you’re under the weather.

Usually, Labrador Retrievers aren’t hard to groom, but they shed a lot because they have a double coat.

They don’t like it when they’re alone for long. But they’re going to behave if you provide them with enough physical and mental stimulation.

Moreover, Labradors also one of the easiest breeds to train and are so cute that they’re bound to attract a lot of new friends in the dog park.

All that said, they’re not the best choice if you live in an apartment.

If you’re looking for the best dog for a single guy in an apartment, the French Bulldog should be on top of your list.

This adorable pooch is playful, sweet, and very popular with the ladies.

Moreover, the French Bulldog isn’t a barker, so they won’t disturb your neighbors when you’re gone.

Since this cool dog breed for guys is low-energy, they’re perfect for single working men.

A daily walk and some toys are usually enough to keep them fit and burn off their energy.

They’re also very affectionate and easy to train because they react well to positive reinforcement and food rewards.

However, these dogs bond tightly with their owners and are miserable when you leave them alone for long.

So, you’ll have to make up for your absence with a lot of attention in the evening.

Despite their large size, the Great Danes are one of the gentlest dogs you can find.

Bred to hunt wild boars, the Great Danes have left hunting days behind them and are excellent companion dogs.

Great Danes don’t require as much exercise as you’d expect and can live in apartments.

Moreover, they’re also very affectionate and sometimes forget how big they’re and try to climb in your lap. They great everybody with a wagging tail and get on well with children.

Moreover, while the Great Danes don’t make a good watchdog, their menacing appearance is enough to make any burglar think twice.

However, while grooming is minimal for this breed, they tend to drool.

If you’re looking for a manly dog, you certainly can’t go wrong with an American Pit Bull.

However, despite their reputations, Pit Bulls aren’t the aggressive dogs the public wants you to believe. They’re very affectionate, sweet, and charming.

But a well-socialized Pit Bull will great any stranger with a happy smile and demand attention. That’s why they don’t make good guard dogs.

While there’re pros and cons of owning a Pit Bull, these powerful dogs are one of the coolest dog breeds for guys.

As long as you can live with a bit of drooling, a Pit Bull makes one of the best dogs for bachelors.

Single men don’t always have the time to take a dog for a long walk outside.

Don’t despair if that sounds like you because I’ve got just the right breed for busy single working men. I’m talking about the English Bulldog.

The English Bulldog is one of the laziest dogs in the world.

This dog hates exercising as much as any couch potato, so you’ll have to force them to move around.

They’re also quite goofy, loving, and charming and don’t mind being alone in the house as long as they have a comfortable spot to nap.

Greyhounds are one of the fastest dog breeds, and that’s why a lot of people think that they make bad apartment dogs.

That’s not true. Greyhounds might need regular exercise, but they do well in apartments because they’re couch potatoes the rest of the time. .

These adorable pooches have minimal grooming needs and are easy to train due to their eagerness to please.

Greyhounds are also very docile and get on well with strangers if properly socialized.

Due to their sensitivity and low indoor energy, they’re one of the best dogs for single older men.

Another great dog with an incredibly cool appearance and friendly disposition is the Akita.

This Japanese dog breed is perfect for bachelors because they’re courageous, fierce, and loyal.

You’d be hard pressed to find a better protector for your house or a more playful companion.

However, the Akita is a strong-willed dog breed with independent thinking and a stubborn streak that rivals a human.

They’re one of the hardest dogs to train, but they’re ideal for a firm and consistent owner who can establish himself as a good leader.

The magnificent German Shepherd is the last dog in our list of the best dog breeds for bachelors.

German Shepherds are extremely versatile dogs, so they do an excellent job as family companions, police dogs, therapy dogs, and guard dogs.

It’s hard to find something the German Shepherd doesn’t excel at because they’re highly intelligent and easy to train.

They also have a bad-ass appearance and are very loyal to their owners.

Besides, most boys who have watched Inspector Rex dream about owning this breed.

Owning a dog is a big responsibility, and as such, you have to find a pet that matches your temperament and personality.

Don’t rush into a breed just because it looks cool. Often appearances are misleading, and you might end up with a dog you can’t control.

What do you think about these 8 best dogs for bachelors? Do you agree or disagree with our list? Tell us below!