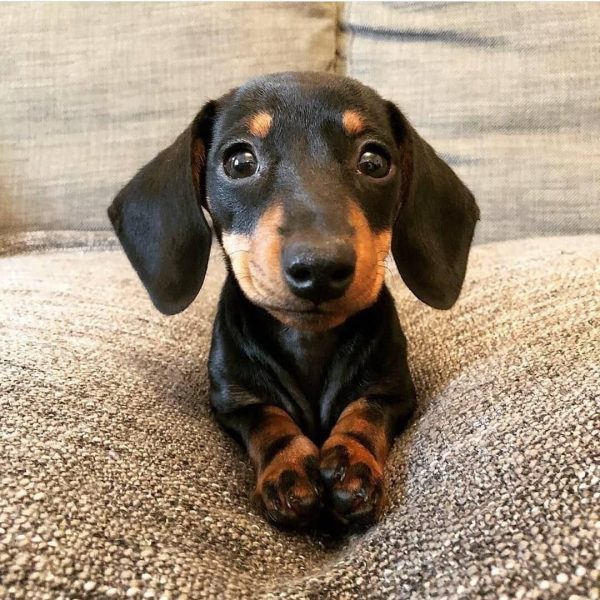 It’s a common question out on the web. This is a great little breed, and a lot of people love their long bodies and short legs. It’s an adorable look. However, for those with allergies, the question of being hypoallergenic is an important one. With such short hair, it’s easy to assume that the Dachshund is a breed that’s easy on allergies, but is it? Today, we’re discussing the breed and answering the question: are Dachshunds hypoallergenic?

Dachshunds are excellent family dogs, fiercely loyal and protective of their people. However, this protectiveness must be tempered with early socialization to avoid any hyper-protective tendencies. This is a tenacious breed, and it’s no wonder. This little guy was bred to be a hunter, used in tracking down tunneling animals like badgers, rabbits, and foxes. Hunters even used them in packs to trail wild boar.

This fearless attitude makes them unafraid to face down animals much larger than they are, and they absolutely will if they feel their home or family are threatened. That’s why early socialization is vital. Outside of their propensity to be overprotective – which can be mitigated – the only other real drawback to this breed is their level of difficulty when it comes to training. While not averse to training, this is an intelligent, independent breed, so you’ll need plenty of patience and lots of positive reinforcement during training.

Dachshunds are incredibly loyal and make excellent watchdogs. Their protective nature couple with their fearlessness makes for a breed that is ready and willing to protect the family. They bond closely with their families, and are even good with kids if treated properly. Be aware that Dachshunds won’t tolerate much in the way of common childhood animal no-nos like being too rough, pulling the tail, and the like.

This breed was tailor-made for hunting in daunting places. Their long, tube-like bodies were perfect for getting into the burrows of various ground animals and rooting them out. This type of hunting required a dog with a fearless attitude, and today, even the most pampered Dachshund still retains that fearless nature. This is a breed that is almost unshakeable in its bravery. While it’s a noble trait, it’s important to temper it with socialization, showing your Dachshund that smaller animals are not prey and larger animals aren’t always a threat.

When properly socialized, Dachshunds love to play with other dogs. They have a lot of energy, and when shown from an early age that not every animal in the world is an immediate threat, they love to work off that energy with their dog buddies.

It’s important to note that the Dachshund can be a destructive breed. Their past as a burrow-hunting dog makes them prone to lots of digging, and when they become bored or get lonely, they’ll often chew. In fact, Dachshunds most often engage in chewing behavior to occupy themselves when their owners are away.

A Great Pet for Most Families

Dachshunds make excellent pets for almost any family. They love to play, and they’re very intelligent, making them a fun dog to be around. Their fierce loyalty makes them a loving dog, as well. Their complete lack of fear may seem daunting at first, but with proper socialization, you’ll be able to teach your Dachshund that he doesn’t need to protect you from other dogs, small rodents, the mailman, and everything else out there in the world.

Dachshunds were originally bred as hunting dogs, and as such, they have a deep reservoir of stamina and energy. Bred for tracking and then infiltrating burrows, the breed needed to be able to do his job for long periods of time. The Dachshund we know today still has that energy. I should point out that their impressive stamina and energy levels are impressive for dogs of their size. While this breed is a little Energizer Bunny for its size, it will not require the amount of exercise as, say, a Husky.

I just touched on this, but the Dachshund is extremely energetic and full of stamina for his size. This means that he’ll love to play and roughhouse in the home for extended periods of time, but walking for exercise will be shorter than his energetic approach to life might leave you to believe. With his small size and short legs, all he needs to work off excess energy and stay in shape is a couple of 10-minute walks a day.

DO NOT engage in high-impact activities with a Dachshund like jumping or running for extended periods of time. While their bodies were designed for digging and wriggling their way into tunnels, they are not so great at standing up to high-impact exercise. Their long bodies make them prone to back problems as you’ll see shortly, and these kinds of activities can exacerbate those issues or, even worse, effectively cause them.

Dachshunds are a mixed bag when it comes to health. Although they tend to be hardy on many levels, they do have a propensity for certain health issues due to their unique structure. In addition, they face the same genetic issues that are common for dogs with long bodies. Unfortunately, skeletal conditions of Dachshunds can be nearly impossible to correct which can lead to a cascading effect of other related issues as they age.

In general, while the Dachshund is quite spry in his early and middle years, almost every Dachshund is practically guaranteed to experience some form of back problem as they make their way into their senior years. This is compounded if he has spent his life jumping up and down off of couches and beds. It’s best to have some sort of ramp of doggy stairs next to all furniture to avoid potential back injuries with this breed.

The most common Dachshund health issues are:

It’s important to note that while a Dachshund is more prone to these health issues, it doesn’t mean that every Dachshund will develop these issues. Intervertebral Disk Disease and other back issues are the only areas in which Dachshunds are almost guaranteed to have problems.

So, Are Dachshunds Hypoallergenic?

The short answer is no. However, there is a caveat. Recall that what classifies a dog as hypoallergenic is a lack of shedding, as hair, especially the follicle is what contains the most allergens like dander and the protein produced in the dog that causes the allergic response. While Dachshunds do shed, effectively removing them from the hypoallergenic category, they don’t shed as much as other dogs. In addition, Dachshunds are known for producing the least amount of dander among dog breeds, which further reduces their potential allergic effect.

So, can a person with allergies still have one? Possibly. If you aren’t highly allergic to dogs, the Dachshund could be a good choice due to his reduced shedding and dander production. However, if you’re highly allergic, it’s best to opt for other breeds that don’t shed at all to reduce the chances of allergic reaction to your pooch.