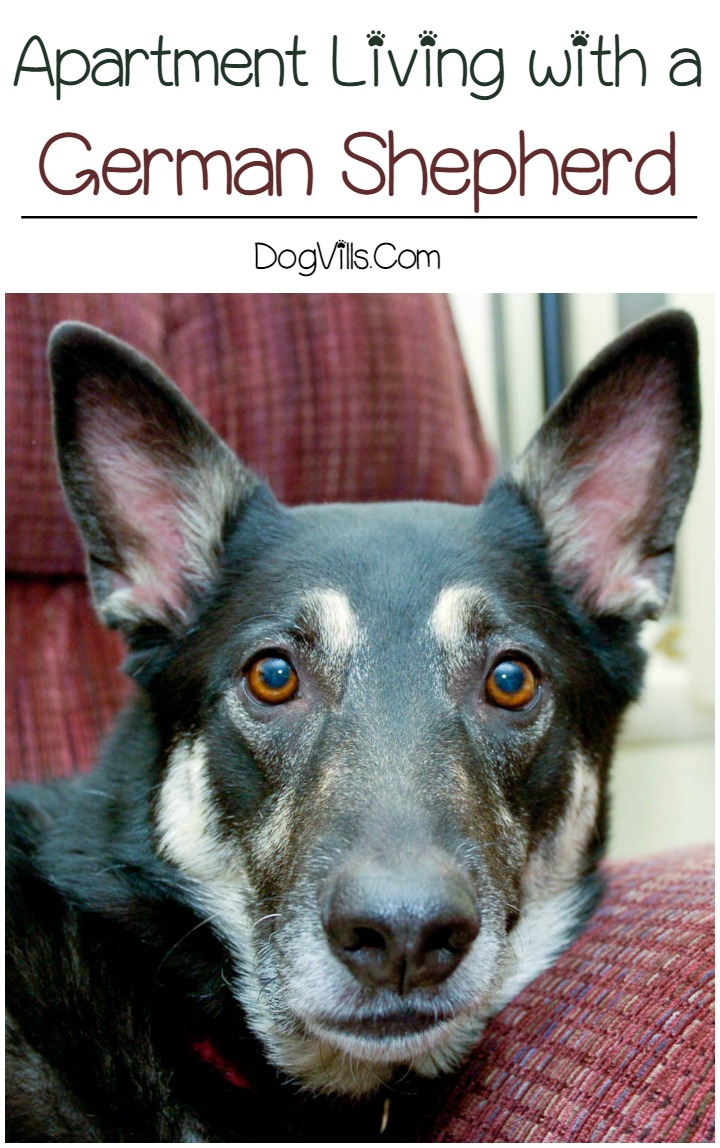 Can a German Shepherd live in an apartment? It can be done, but you have to follow up the following tips and tricks. read on to find out.

Apartment living with a German Shepherd isn’t as hard as many people believe. In fact, they really are one of the best apartment dogs if you make sure their basic needs are met. The fact is, size rarely makes a difference in how well a breed can thrive in an apartment. It’s more about how well the owner manages their breed’s physical needs that determine their success. This is especially true of the German Shepherd. Let’s take a look at how to make German Shepherd apartment life a lot easier on both of you.

Apartment Living with Any Dog is All About Management

First, let me say that properly meeting your dog’s physical and mental needs is key when it comes to any breed living in an apartment. Whether you have a ginormous Mastiff or a tiny Chihuahua, you have to address your dog’s individual needs to give them the best apartment living situation. Exercise, separation issues, mental stimulation – all of these things have to be addressed.

First thing’s first. You’ll have to find an apartment that accepts a dog as large as a German Shepherd. You’ll have a few things stacked against you on this front. For starters, many apartment complexes have size and weight limits. In addition to that, many complexes put German Shepherds into the “aggressive” category, which means they won’t allow them in any of their apartments. This is ridiculous, but what can you do?

I don’t think I have to stress to you how important it is to be upfront and honest about your dog breed when applying for an apartment. I’ve known a few people who thought they could just fib a bit and sneak a “banned breed” in after they signed all the paperwork. German Shepherds are very distinct breeds. No one is going to believe that he’s just an overgrown chihuahua! You’ll be busted the first time you take him for a walk.

I highly suggest finding a dog-friendly building, rather than just a building that allows dogs. Ideally, you want to live someplace where people are pretty laid back about the somewhat annoying aspects of dog ownership (like a barking dog or hair all over the place). In the perfect world, there would be whole buildings dedicated to apartment dog living! Until that happens, just look for signs that say “dogs are totally welcome and accepted here.”

Speaking of walks, plan on taking a lot of them! Exercise, exercise, exercise. I can’t say that one enough. The German Shepherd isn’t a lap dog, and he’s not a Mastiff, who just wants to lay around all day. German Shepherds need plenty of physical and mental stimulation. If you’re going to have a Shepherd in an apartment, you’ll need to aim for at least two hours of off leash time daily, preferably before you leave for the day, if you want to avoid any issues with bad behavior.

Ideally, try to find an apartment within close walking distance of a good dog park so he can enjoy that off leash time. If that’s just not feasible, you do have some other options. Check with local dog trainers and veterinarians. Some of them host dog social hours in a fenced-in yard. While it’s not as big as a dog park, it’s definitely more liberating than walking by your side nonstop. If worse comes to worse and you just can’t find an open-air park for your pooch to run around in, get a really long leash and give him the slack to explore. Obviously, you don’t want to do this in the middle of a busy sidewalk, but even in cities you can usually find one dog-friendly area with a little more leg room.

Related: ► German Shepherd Life Expectancy – How Much Time Will You Have

This is another important aspect of apartment living with a German Shepherd. These dogs are smart. Incredibly intelligent. And they hate to be bored. So, in addition to a couple of hours of off-leash time, you’re also going to want to include some indoor mental stimulation. A half hour of obedience training – complete with his favorite treats – should suffice.

You’ll also want to stock up on interactive toys and dog puzzles for him to play with, especially if you’ll be at work during the day. Like I said, these are incredibly smart dogs. The last thing you want is a bored German Shepherd. I’ve heard stories of GSDs unlocking doors to go find their people! I’m not joking!

Related: ► German Shepherd Life Expectancy – How Much Time Will You Have

While exercise and mental stimulation are the top two things you’ll need to consider when making apartment life with a German Shepherd work for both you and your dog, there are other factors. If you’ll be away from the apartment all day, you might want to consider crate training your GSD.

A large, roomy crate is a must, but it doesn’t have to take up the whole apartment all day every day. Look into crates that collapse when not in use. I have a rather large crate that’s as sturdy as can be when upright, but collapses down almost flat with a few quick steps when not in use.

You could also consider barricading your dog in one room while you’re gone. If you go that route, make sure you grab some super absorbent puppy pads. I suggest giving it a test run before you leave the house for hours. German Shepherds are escape artists, so you’ll need a gate that they can’t jump, or put them in a room that they can’t destroy. Stand outside your apartment door for a bit and listen to make sure they don’t knock down the bedroom door. Yep, that’s a very real possibility!

One last tip, and this one is important. German Shepherds have great BIG voices. When they spot danger (or a rogue squirrel), everyone on your floor will know about it. It’s super important to teach your dog good manners, like how to not bark at everything that moves. It’s tougher with GSD dogs because their instincts are to protect you from perceived threats.

If you’ve done your homework and found an apartment building filled with as many dog owners as possible, a random barking session here and there isn’t going to cause a rift between you and your neighbors. If it happens constantly, though, even the most patient neighbors will get annoyed pretty fast.

When you move into the building, introduce yourself (and your dog) to those around, above, and below you. If they know you and your dog, they’re less likely to get angry and call the landlord (or worse) on you the first time your pooch decides that the bedroom heater is out to get you.

Related: ► German Shepherd Dog Training: What You Need to Know

A German Shepherd in an apartment isn’t much different than in a house!

When it comes to any dog, be it a German Shepherd or a Toy Poodle, apartment living and single-family home living are pretty much the same. All you need to do is be sure you address your dog’s physical and mental stimulation needs, and you should have no problem making the best of apartment living together!

I’m always reminded of what my boss at the vet used to say. “It’s hard to be ‘bad’ when you’re exhausted.” Keep that in mind. If your apartment living experience includes a German Shepherd, give him plenty of exercise and training, and you should be just fine.

Have you ever lived in an apartment with a German Shepherd? How did you make it the best experience possible? Share below!