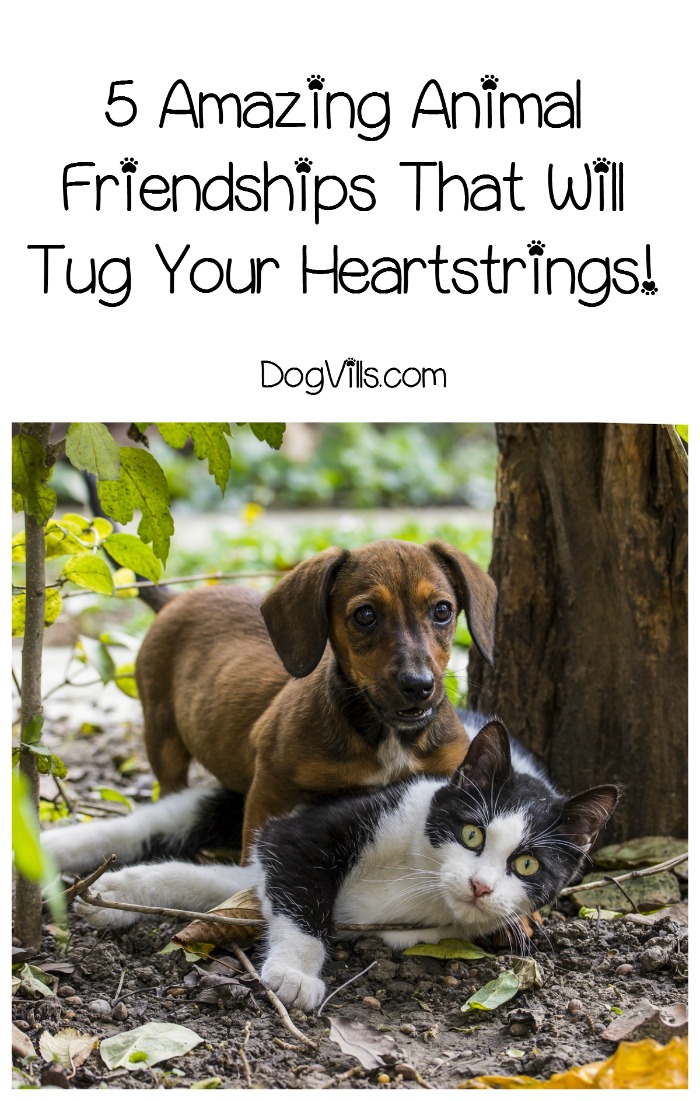 Animal friendships are so amazing, especially when you see two animals you thought would never get along actually hanging out together.  It kind of gives you hope for our own species! If a lion, tiger and bear (oh my!) can all get along, then why can’t we, right? Watching footage of some amazing animal friendships has been one of the most heartwarming things I’ve done in a long time! Check out a few of the beautiful bonds between species that really grabbed my attention and my heart!

Imagine a black bear named Baloo, a tiger named Shere Khan and a lion named Leo hanging out on their stoop on a Friday night.  Sounds like a Disney movie, right?  In fact, this trio of unlikely animals had a wonderful friendship, having formed an unlikely bond after having been rescued several years ago from deplorable living conditions where they kept illegally as pets.  The trio were rescued by Noah’s Ark Sanctuary in Georgia and soon flourished and remained  best friends.  Sadly, Leo the lion passed away last year, yet Baloo and Shere Khan continue to live together as best buddies.  Check out this unlikely trio here:

Here is the tale of a real life fox and hound duo, featuring a wild fox named Sniffer and domestic dog called Tinni.  In the woods of Norway, Tinni was out for a stroll with his owner and met Sniffer the fox.  The unlikeliest of friendships blossomed, with Sniffer and Tinni continuing to hang out and play every chance they get!  You can see a video of the pair here:

Another wonderful tale of friendship is that of Suryia the orangutan and Boscoe the dog.  The pair first set on eyes on each other at the Institute of Greatly Endangered and Rare Species in Myrtle Beach.  Boscoe and Suryia were immediately drawn to each other and have been friends ever since.  You can find out all about them here.

Here’s the story of Albert the sheep and baby elephant Timber who are the best of friends at Shamwari Animal Wildlife Rehabilitation Centre in South Africa.  Timber had lost his mother when he was just only six months old, and was struggling to survive.  He was rescued and brought to the Shamwari Centre, where Timber slowly came out of his shell and began to thrive, all with Albert the sheep by his side.  You can check out the full documentary about this dynamic duo here:

Lastly, I’m including the story of Penny the Silkie chicken and Roo, the two-legged chihuahua.  Both animals were rescued by Alicia Williams, a receptionist with a heart of gold at Duluth Animal Hospital.  Penny and Roo spend almost all of their time together, even going with Alicia to work every day! You can see more of this adorable pair here:

Isn’t it amazing how perfectly these different animals are able to get along with each other despite their differences, and have wonderful friendships despite the odds?  What amazing animal friendships have you observed?