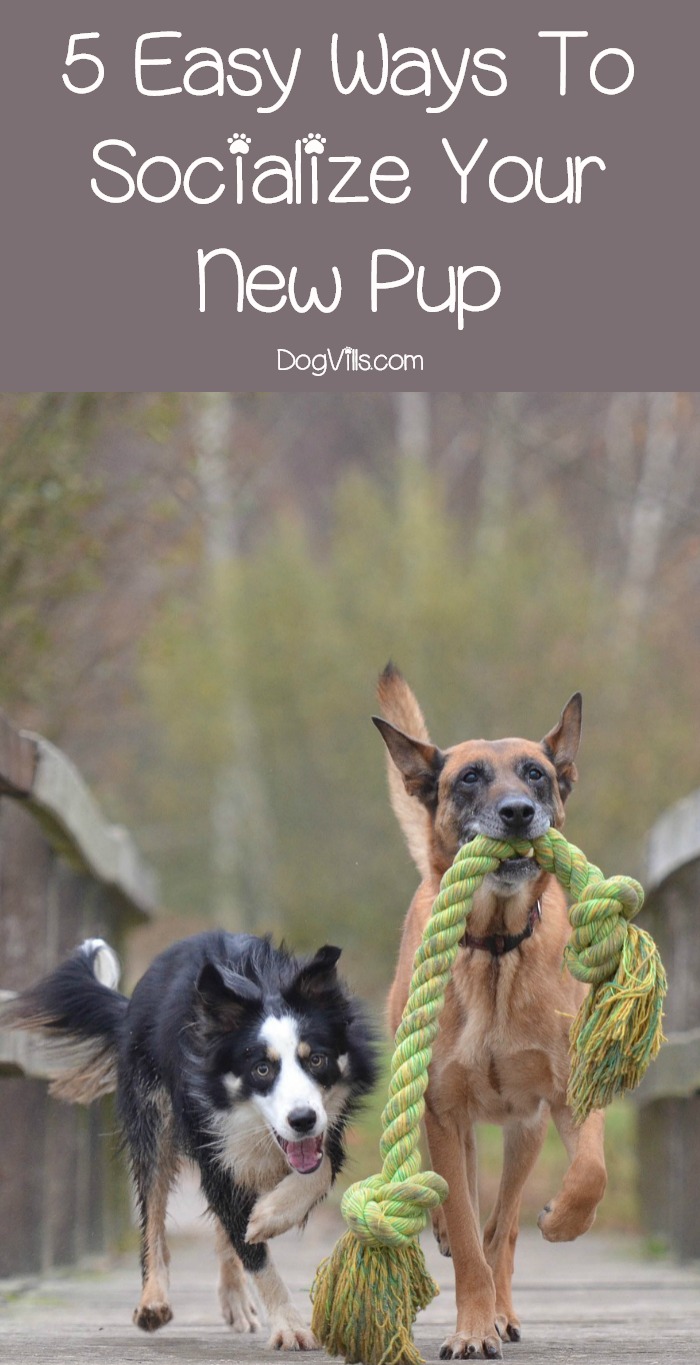 Think a trip to the dog park is the only way to socialize your pup?

You don’t have to live next to a puppy playground to help your new furry pal make new friends.

We’re going to show you five other fabulous ways to socialize your new pup that you can do anywhere!

How to Socialize Your New Pup

As every dog owner will tell you, puppies are a joy to have around, but also quite the challenge.

You, as the proud new owner, have many important tasks so that your puppy can grow into a happy, calm, well-behaved dog.

One of these crucial tasks is socializing – teaching your dog to be comfortable with the surrounding world.

Unless you plan on living on a lonely island and never go out of the house, your puppy will have to get used to certain sounds, noises, smells, humans, and animals. Otherwise, you’ll run into behavioral problems.

An unsocialized dog often reacts in two ways – flight or fight. Either one can be an issue.

You can lose your dog in the street if it gets scared by ordinary noises. Jack could also bite someone – a person or a pet – because he feels threatened.

But I’m sure that you know the importance of socialization. So, today we’re going to talk about five ways to socialize your new pup.

Related: Are you Making These 5 Common Dog Socialization Mistakes?

Puppy kindergarten is an excellent way for the little one to meet other dogs and people in a safe, controlled environment.

During the lessons, your pup will play-fight with other puppies and learn how to be gentle when wrestling and biting.

He will also get used to unfamiliar people petting and handling him, which will make him less wary of strangers.

What’s more, some classes would expose your dog to weird sounds, sights, and situations to make Jack comfortable with loud noises, animals, and objects.

Another benefit of puppy classes is basic obedience lessons, which will be useful not only for your pooch but also you. However, keep in mind that your puppy should have received at least his first vaccination to avoid catching a disease.

Send invites to friends and relatives and ask them to bring their pets to your house for a puppy party.

It’s the perfect opportunity to expose your puppy to various stimulus and let him meet some new friends. Don’t forget to allow everyone to pet the pup, under your supervision, so that Jack can get used to unfamiliar people touching and petting him.

It’s a good idea to include babies and children so that your puppy can have the full experience.

Later, you can also arrange play dates and take your puppy to friends’ house so that he gets used to visiting other houses.

Just make sure that all dogs your puppy meets are healthy and vaccinated.

It’s impossible to socialize your pup to every unfamiliar sound, smell, or object in the world.

Focus on things you’ll encounter around your house and during your walks together. For example, there is no need to socialize your pup to the sound of mooing cows, if you don’t live a farm since it’s very unlikely that you’ll meet one in the city.

However, there is heavy traffic around your puppy needs to be familiar with the sounds of speeding cars, honks, shouts, to name a few. Think carefully and make a checklist to follow. If you’re not sure what to include, you might use this one.

Then start slowly to introduce your puppy to every item on the list.

If Jack seems frightened of something, for example, loud children, don’t force the matter. Start slowly and remember to carry plenty treats so that your pooch can relate the experience with something positive – e.g., yummy foods.

Get your puppy and hang out in front of a big, busy mall. A lot of people will immediately come and ask to pet him, so it’s a great opportunity to meet people of all ages, size, color, wearing different clothes and accessories.

Don’t forget to bring treats and give them to the strangers to feed your dog.

You should also take him for walks around the neighborhood to exposed Jack to different, unusual objects and sounds. You might think that a fire hydrant or a garbage can looks innocent, but it might be a big deal for your puppy.

In addition to this, you should introduce your dog to different walking surfaces, so that you don’t end up with a dog scared to step on an escalator or a carpet, for example.

Bored with the same old walk? Try these 5 Games to Make Walking Your Dog More Fun!

# 5 Drive around the city

Remember, your goal is to expose the pup to a variety of sounds, objects, and people so that he doesn’t react negatively in the future. What better way to do that than going for a ride in the car? You can take him to the park, a friend’s house, the beach – a place where you’re going to have fun and meet many new and exciting things.

What’s more, it’s important that your puppy has nice experience related to cars or taking him to the vet will turn into a nightmare of howling and whining.

Don’t way too long to start socializing your puppy. The window of opportunity is between the 3rd and the 12th week when the puppies are more curious than suspicious of new things.

After your puppy gets too old, it won’t be so easy to acclimatize it to new experiences or objects, and you won’t like the consequences.

What to do you think about these five ways to socialize your new puppy? Have you tried them? How did you socialize your pet? Share your story in the comments.