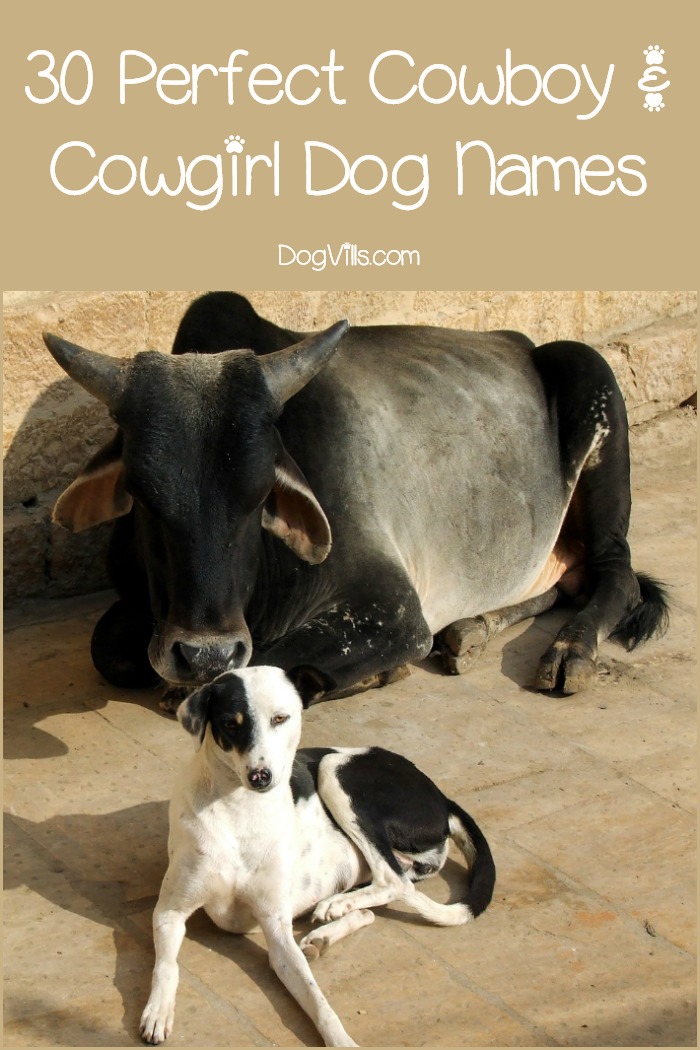 Looking for some fun cowboy and cowgirl dog names to celebrate your country heritage?

You’re going to love all these fun monikers!

From classy country western dog names to clever redneck names, we’ve got all the cutest and funniest things to call your new dog!

Let’s check them out, shall we?

Affiliate links included below. If you make a purchase through these links, we earn a small commission at no extra charge to you.

This town ain’t big enough for the 2 of… oh, look! Pizza! #cowboydog #dogsofinstagram

According to the Merriam-Webster Dictionary, a cowboy is defined as “one who tends cattle or horses,” or “a rodeo performer.”

If you are looking for a cowboy and cowgirl dog names, you may also want to consider related categories like:

We’ve picked out our favorites in each category for you!

1. Bandit- A bandit is an outlaw, robber or thief, often part of a traveling gang. Bandit is the perfect name for a dog who is energetic or mischievous.

2. Cletus– Inspired by the hillbilly on The Simpsons

, the name is actually a Greek moniker that means “glory.” It comes from Klietos, a general in Alexander the Great’s army, according to Think Baby Names.

3. Outlaw– An outlaw is someone who has broken the law and is considered to be a fugitive. Some of history’s most notorious outlaws include Billy the Kid, Jesse James, Wild Bill Hickok

4. Betty Lou– Betty is from Hebrew origin meaning “pledged to God.” The most popular fictional character is Betty Lou Who, who was the mother of Cindy Lou in the 2000 movie, How the Grinch Stole Christmas

6. Elly May– Elly is from English origin meaning “bright shining one.” The most famous fictional character is Elly May Clampett from the television series, The Beverly Hillbillies

8. Desperado– Desperado is a desperate or reckless criminal. Desperado

9. Magnum– Magnum is a popular line of rifle cartridges, ranging from .17 caliber to .50 caliber. The two most popular ones are the Smith & Wesson .357 Magnum and the Remington .44 Magnum.

was a famous sharpshooter and an exhibition shooter. Annie Walsh was a criminal who was the leader of the gang known as the Lady Gophers.

11. Belle– Belle is from French origin meaning “beautiful.” Belle Starr was a notorious outlaw, mainly associated with the James-Younger Gang.

, the all-girl country band. While the word itself means “tenth,” Dixie is also a region in the south.

➨➨You might want to check these classic dog names from literature

was a famous actor, rodeo performer and singer, nicknamed “The Singing Cowboy.”

14. Cody– After Buffalo Bill Cody, one of the greatest Wild West showmen throughout history. The name means “helper” in Gaelic.

17. Maggie– Maggie is from English, Greek and Scottish origin meaning “pearl.” Maggie Parker is a cowgirl and the first female professional bull rider.

18. Velma– While the name was made popular by Scooby-Doo

, Velma is actually one of the most influential cowgirls, according to Equitrekking. You might know her by her other name, “Wild Horse Annie.” She was passionate about protecting wild horses.

19. Jedediah– Jedediah is from Hebrew origin meaning “beloved of the Lord.” Jedediah Smith was a famous author, cartographer, explorer, frontiersman, hunter and trapper.

🐶 Got that windswept look 👀 #montana #ranchdog

23. Silos- Silos is from Latin origin meaning “of the forest.” Silos are mainly used in agriculture to store bulk materials, most notable fermented feed and grain.

24. Tiller– A tiller is a farm implement, also referred to as a cultivator. This piece of agricultural equipment is used to pulverize and stir the soil before the planting process.

25. Fallow– Fallow refers to the coloring of a fallow deer, which is a pale sandy-brown color. In the area of farming, a fallow is known as one of the stages in crop rotation, in which an area is left unsown in order to restore its fertility.

26. Lassie– Lassie is from English origin meaning “girl.” The most well-known Lassie

is a fictional character, a Rough Collie dog breed, from books, movies and television.

Most people really don’t understand the breed. The horse might think he’s a dog & the dog might think he’s a horse, all they know is unconditional love for each other #pitbull #pitbulladvocate #pitbullsofinstagram #pitbullpuppy #quarterhorse #threespinstovegas #rodeodog #theyloveme #LoyallDogContest @wranglernetwork

27. Lasso- Lasso is from the Castilian Spanish word, Lazo. It is defined, by the Collins English Dictionary, as “a long rope with a loop at one end, used especially by cowboys for catching cattle.”

is defined, by the Merriam-Webster Dictionary, as “a sharp pointed object that is attached to the heel of a horse rider’s boot and that is pressed into the horse’s side to make the horse go faster.”

30. Lindsay– Lindsay is from Scottish origin meaning “from the island of the lime tree.” Lindsay Sears is a two-time winner of the World Championship Barrel Racing, one in 2008 and the other in 2011.

How much do you love all of these cowboy and cowgirl dog names? It’s hard to pick a favorite, isn’t it? I kind of love Bonnie for a girl, and Wyatt for a boy.

How about you? What are some of your favorite cowboy and cowgirl dog names? Share below!