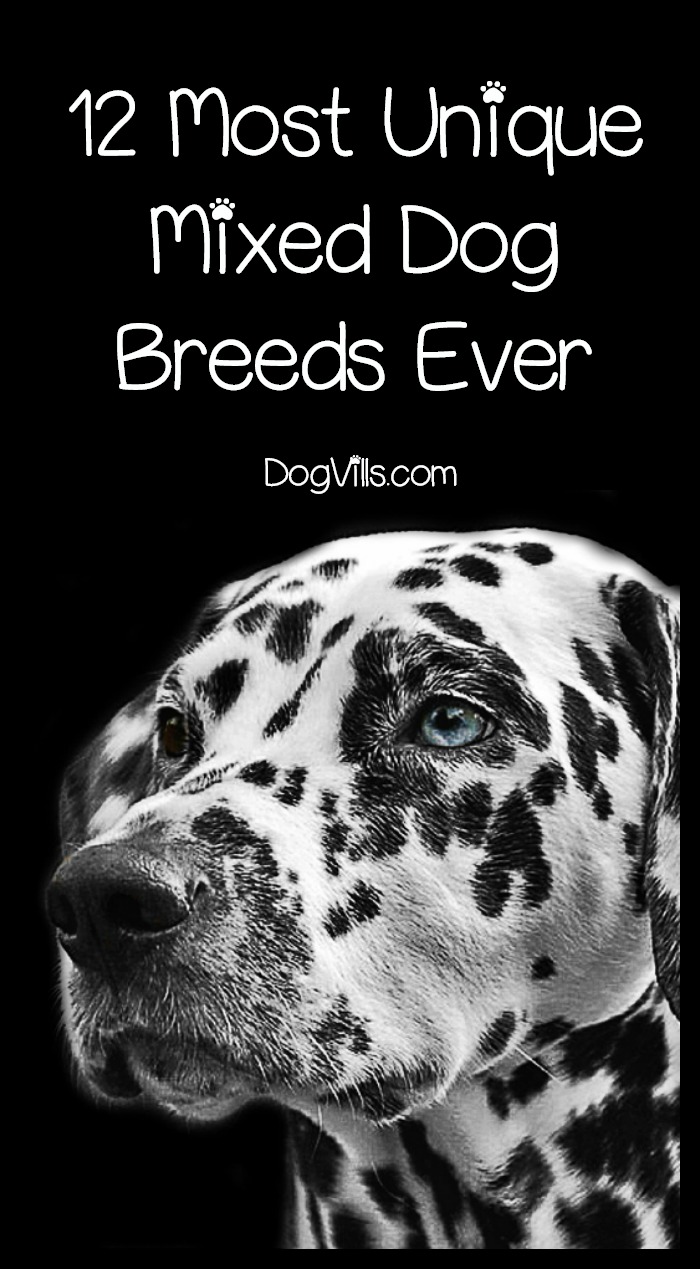 Looking for the most unique mixed dog breeds you’ve ever seen? You have to check out these 12 beauties! Who knows, you may just find your family’s next furry best friend!

Dogs come in all different coats, colors, personalities, shapes and sizes. Throughout history, most people considered purebreds the cream of the crop in the canine world, but over the years we’ve come to learn that mixed breeds aren’t just as beautiful and loyal as purebreds, but are often healthier, too! There are countless combinations of breeds out there (including some super strange breeds that make you think “how did THAT dog mate with THAT one???”), but these 12 top our list as the most unique! Check them out!

Most Unique Mixed Dog Breeds Ever

1- Aussiepom– The Aussiepom is a cross between a Toy or a Miniature Australian Shepherd and a Pomeranian. These dogs are easy to train and are very loyal to their owners. They feature coats that come in either black, blue merle, red or red merle.

2- Beaglier– The Beaglier is a cross between a Beagle and a Cavalier King Charles Spaniel. They are most commonly found throughout Australia. These dogs feature color-combination coats including black & tan, orange & white, red & white and yellow & white.

3- Bullmation– The Bullmation is a cross between a Bulldog and a Dalmatian. These dogs are medium to large sized with a lifespan of 10-12 years. They make excellent family pets and are great with kids, cats and other dogs.

4- Cavachon- The Cavachon is a cross between a Cavalier King Charles Spaniel and a Bichon Frise. These small dogs are great companions for apartment dwellers, home owners and RV travelers. They are energetic, loyal and tolerant dogs.

6- Cocker Pei– The Cocker Pei is a cross between a Cocker Spaniel and a Shar-Pei. They are medium to large sized dogs, weighing an average of between 40-65 pounds. These dogs are social, strong-willed and stubborn.

7- German Chow– The German Chow is a cross between a German Shepherd and a Chow Chow. They have an average lifespan of 10-12 years and are medium to large sized dogs. They are clever, energetic and loyal dogs.

8- Golden Dox– The Golden Dox is a cross between a Chinese Golden Retriever and a Dachshund. They are loyal, protective and social dogs. These dogs don’t really have an “average” size, since it completely depends on which dog breed is the dominant parent.

9- Golden Husky– The Golden Husky is a cross between a Golden Retriever and a Husky and are sometimes called a Goberian dog. These attractive dogs are extremely loyal companions.

10- Goldendoodle– The Goldendoodle is a cross between a Golden Retriever and a Miniature or a Standard Poodle. They are affectionate, intelligent and friendly dogs. These dogs are also known for their mysterious ability to communicate with humans.

11- Schnoodle– The Schnoodle is a cross between a Miniature Schnauzer and a Poodle. These dogs make excellent companions and absolutely hate being outdoors. They are alert, charming and intelligent dogs.

not only has he lost his manhood, he's now lost all his fur…sorry g✌🏼#puppy #schnoodle #😍

12- Yorkipoo– The Yorkipoo is a cross between a Yorkshire and a Toy or a Miniature Poodle. They are friendly, playful and smart dogs. These dogs feature the bright nature of the Yorkshire Terrier and the trainability of the Poodle.

Sorry I have not been posting lately. I do not have any good pictures of Luna 😂😂 #yorkipoo

Personally, I think all mixed dog breeds are beautiful, don’t you? If you’re considering one of these mixed breeds (or any other), remember: adopt, don’t shop! There are millions of dogs from all breeds waiting for someone to come along and give them a forever home!

What are your favorite mixed dog breeds? Share below!